When I’m on the Hayabusa and on a trip, I’ll sometimes hit the horn, just to hit it. Much of the time I can’t hear it or it’s very very faint. Unfortunately the stock horn is just pretty wimpy. As such, I went out last year and picked up a Siebel 139db air horn. I bought it from TwistedThrottle.com and have had it sitting in the garage since last year. Mainly because I haven’t been able to find what I think is a good and audible place to put it. I really didn’t want to hide the trumpets since that’d muffle the horn.

But when I attended the Sport-Touring.Net National Meet in June, one of the riders happened to have this very same horn installed on his bike. He demo’d it to us (after yelling “horn‘ in the parking lot to warn people) and it’s frigging loud. As loud as it is, I figured I could just mount it anywhere at all and it’d be loud and certainly louder than the stock horn.

The horn comes in a small box with several suggested methods of installing the horn and also wiring suggestions if you have a single power wire or double wires to your horn. It comes with a regulator so the horn gets power and goes off when you press the horn button, a bolt and an mount platform.

I decided, after a bunch of searching, to see if the horn’d fit in my trunk. There’s a lot of room and as long as my tool kit fit, I figure I was coming out ahead. I mounted it in the trunk, bolt through the fender, and then mounted the regulator to the side of the compartment. I ran the ground from the horn to the ground on the bike. I ran power to the BlueSea fuse box I already installed (it has a fuse at the power point and an inline fuse to the battery) and to the horn. I ran the ground and power from the original wires back along the frame and under the tank to the regulator. I left the stock horn in place since if I need to reconnect the horn, I just need to pull the two wires and plug the other two back to the stock horn and I’m on my way. 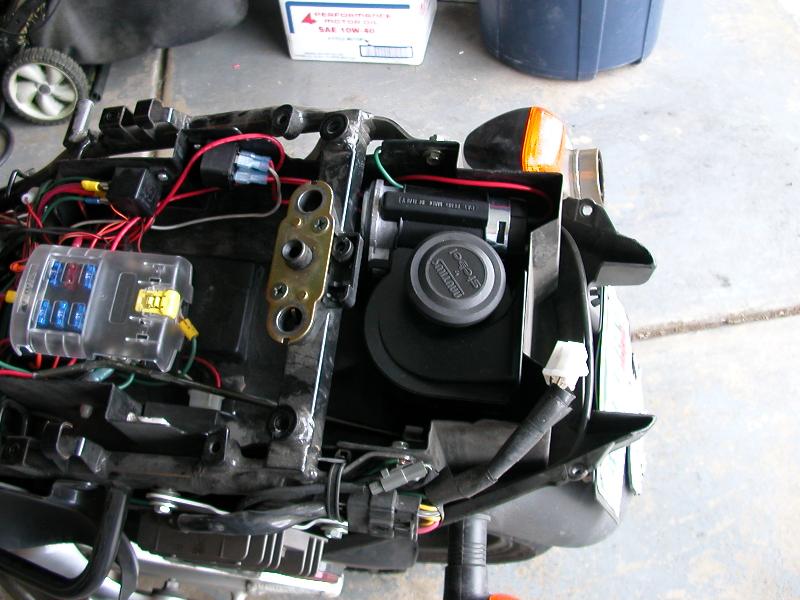 This is the BlueSea fuse box I installed. The wire to the top left of the picture is the data line for the GPS. One of the white twistied lines is the Gerbing’s Wire and the other is for the Autocom helmet speaker/mic system. I’m using the tail light line as the powerup line. When the bike has power, the BlueSea also has power which then lets the rest of the farkles get power. 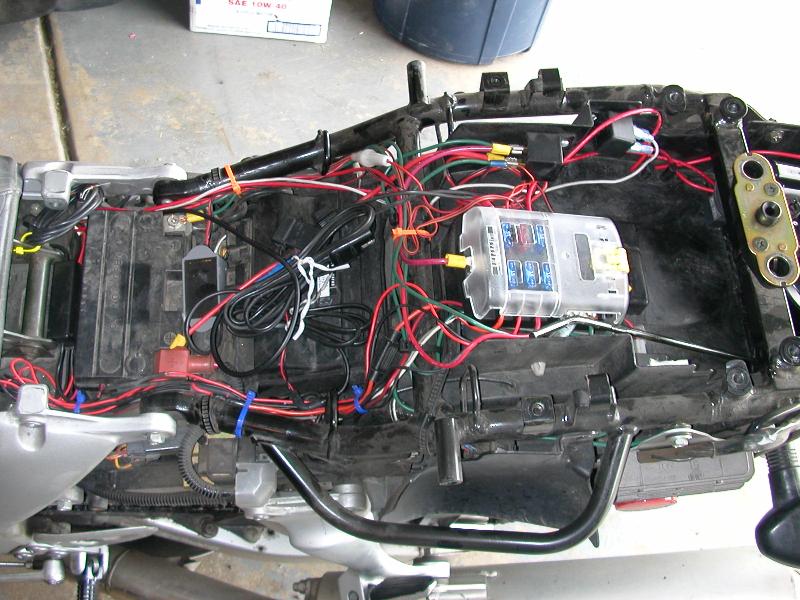 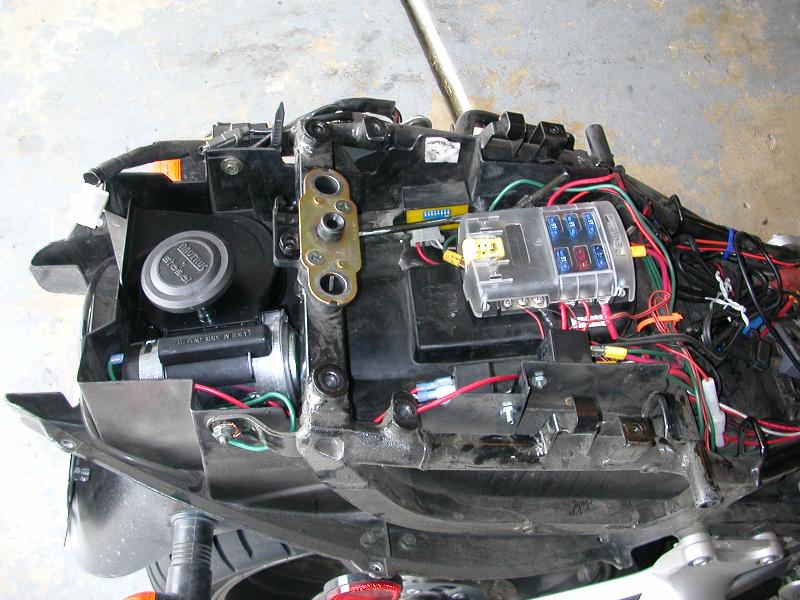 Because the horn was leaning flat against the rear of the compartment, I whipped out the dremel and cut out a pair of holes for the sound. Since the cowling gets put back in, it’s probably not going to be a ton of help but every little bit helps. 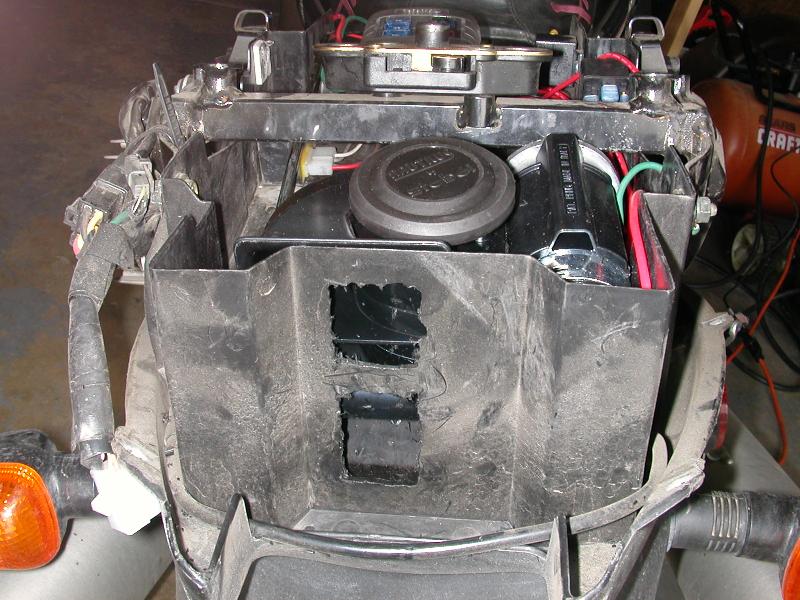 The cowling back on the bike. You can just see the horn peeking out from the tail section. Didn’t realize there was that much room, eh? 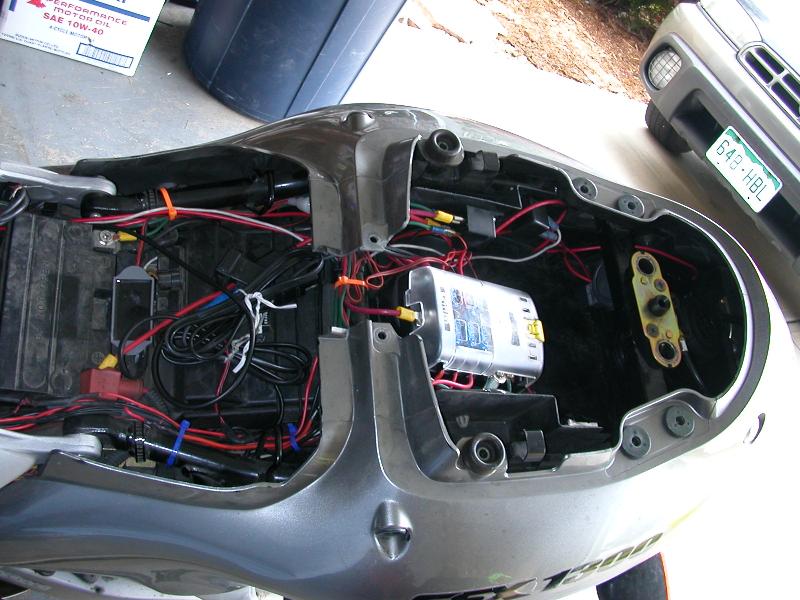 And the finished product. You can’t even tell I’ve been mucking about with the bike. 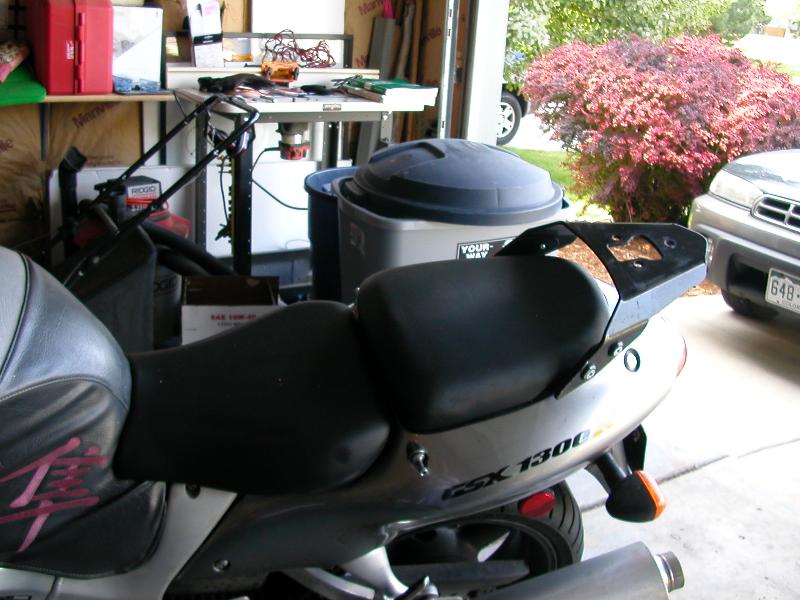 This entry was posted in Maintenance. Bookmark the permalink.