Tuesday night (July 5th), Jeanne asked me to come to her place in order to have dinner with her and her family friend who’d been staying with her off and on since last August. He was buying dinner as a token of friendship and thanks for letting him room with her.

On the way, I took I-25 south from Longmont and got off at 136th Ave. This is where I normally get off when going to see Jeanne, and head east to Washington. In the picture/diagram below, I’m the green line. The red line is the woman who pulled out in front of the truck. 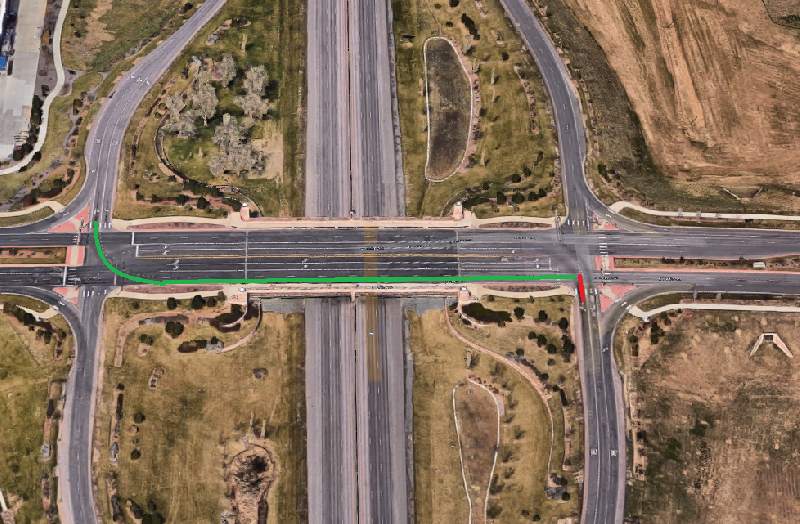 In looking at the next picture, I’m the green arrow and she’s the red one. The light is green for me and I’m accelerating but probably doing 30 to 35mph. The speed limit is 45mph and I’ll be turning right in a half a mile or so. It’s about 6:10 to 6:15pm, a little cloudy in the distance but clear where we were. Sun to the west and setting. 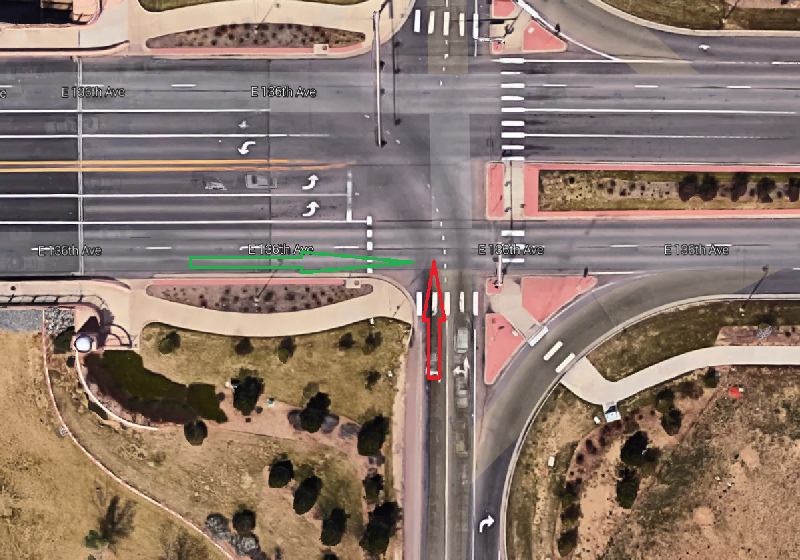 She was stopped at the red light and suddenly pulled out. I was about at the stopping line for the intersection so was unable to stop in time. As you can see from the picture, the front right fender of the truck hit her at the front of the left fender and bumper and pushed her about half way across the next lane. I ended up pointing at the stop light pole. 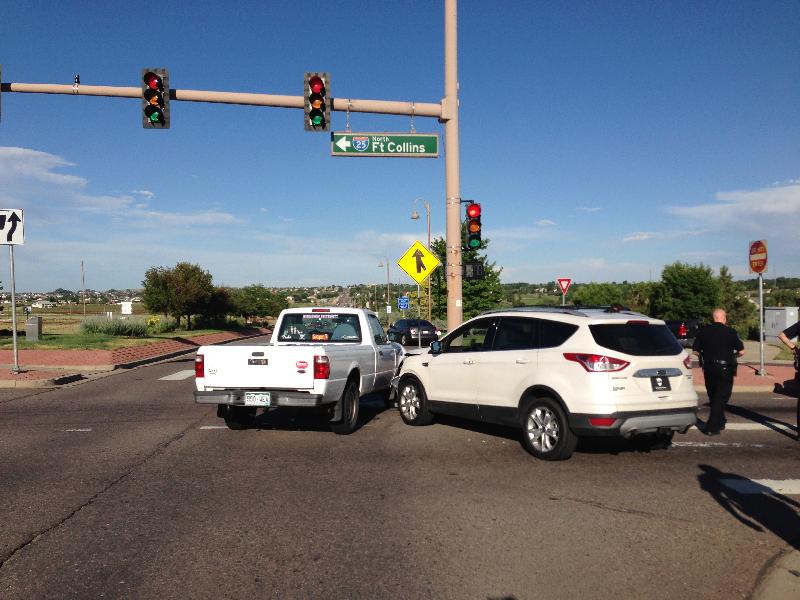 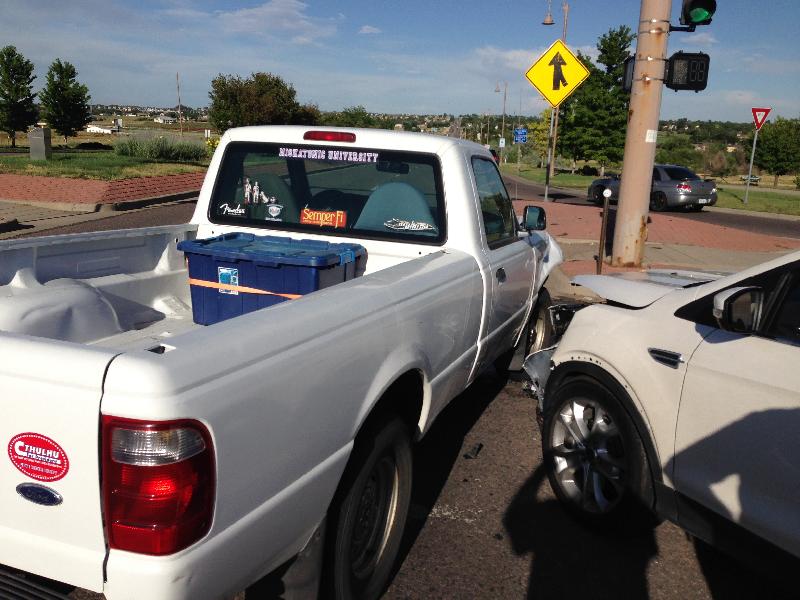 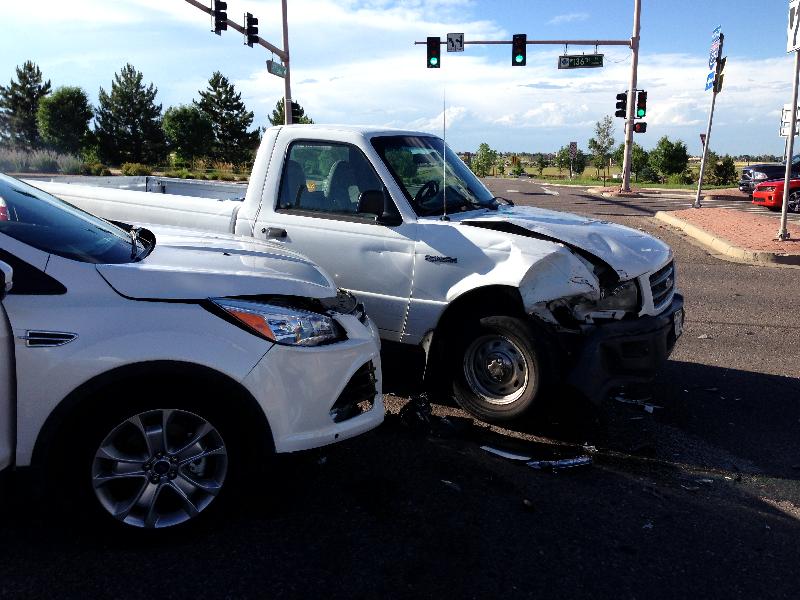 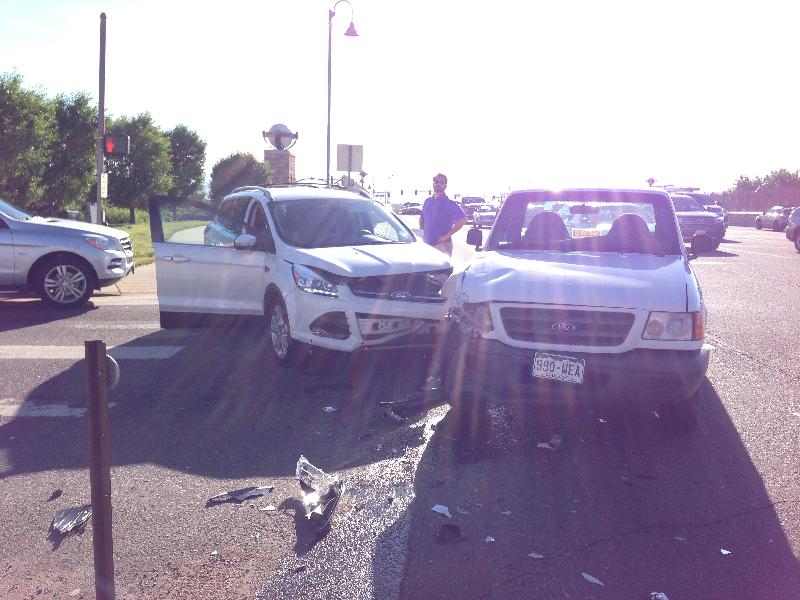 I had my iPad and Abi’s check (Jeanne’s daughter) she’d left at my place on the passenger seat and it flew forward onto the floor and my glasses were ejected from the front of my shirt onto the floor under my feet. I shut down the truck and did a quick self check. Nothing hurt or bleeding. Look over at her and then get out and walk around the back of the truck and ask if she’s okay. She nodded and I asked about the male passenger too. Everyone seemed okay. She apologized profusely.

Basically that several times over the next hour or so.

I had my phone out and she asked if I’d called 911 yet. I said I was just doing so and then spoke to the 911 operator. As it was the off ramp from I-25 north, it wasn’t as easy giving the intersection but I finally got it across to her. I answered her questions and she said the police would be on the way.

Not long after, the police arrived and started getting information and then provided a report for me to fill out. It would have my information to be passed to her and vice versa, plus a written report of the accident. The report would not go to her and I wouldn’t see her report, just her information.

A bit later, her husband arrived in his jeep.

It took about 45 minutes total from the time of the accident to the tow truck arriving, picking up both her and my vehicle, sweeping up the majority of the mess, and leaving. 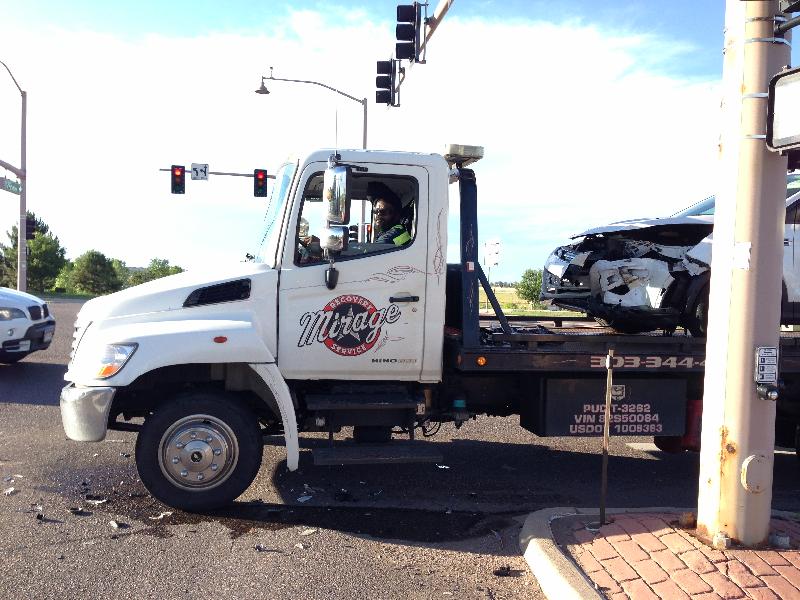 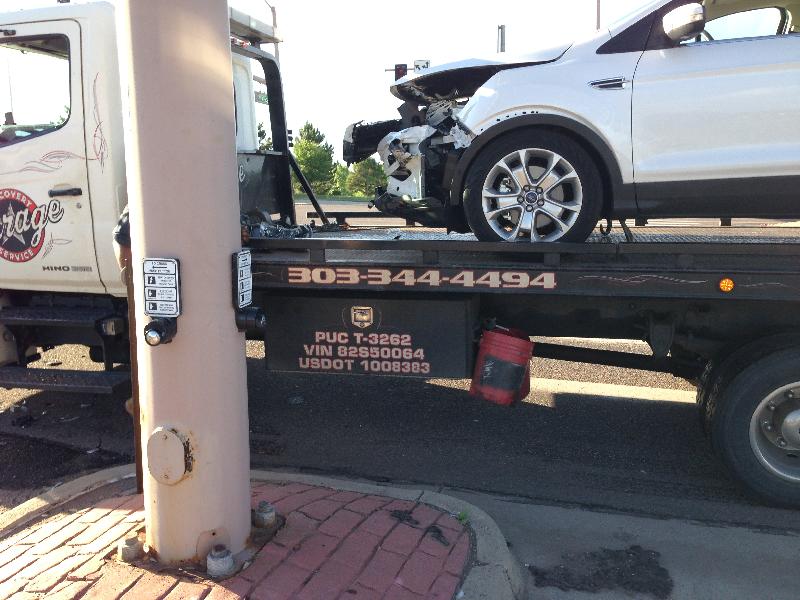 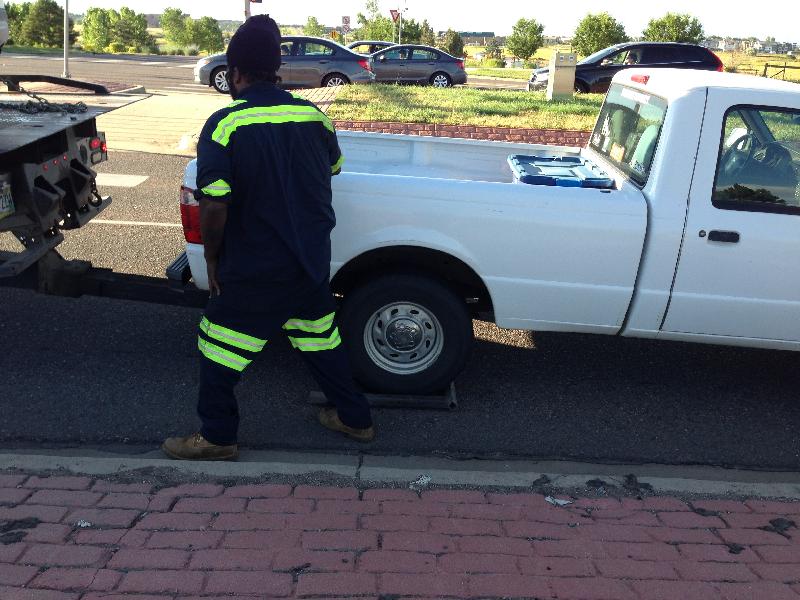 Once done, I walked to Jeanne’s. She’s only a bit less than 3 miles away so it wasn’t a bad walk. My left arm was feeling a bit sore though. Shock wearing off I’m guessing. I spoke to my insurance folks while walking and took down phone numbers and claim numbers, plus passed along her information.

At Jeanne’s, I sat on the couch until Jeanne got home and then we headed to Kaiser to be checked out. 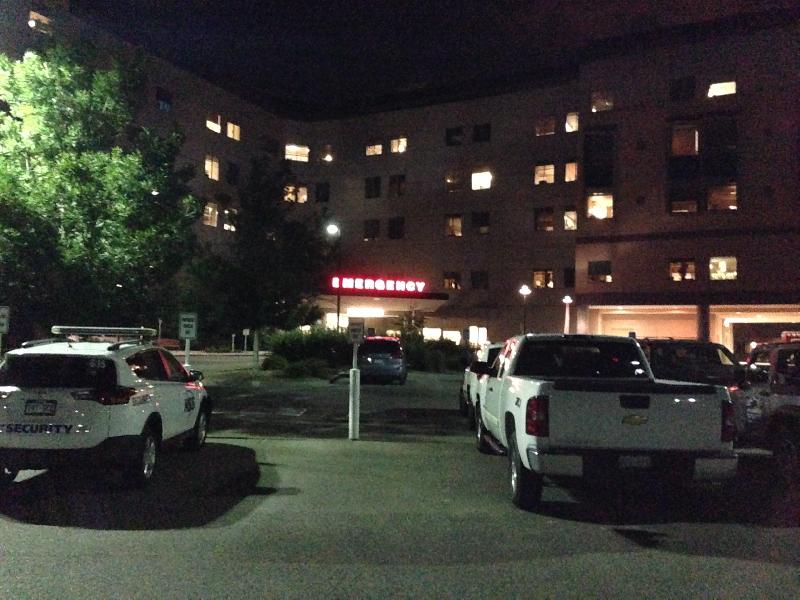 Humorously the lady and her husband were in the Emergency room as well. Her pregnant daughter was in the car too and she wanted to have her checked out. She was okay and asking for some food.

I was called in to get my vitals (117/65 🙂 ) and then get checked out by the nurse. He did a quick check for seatbelt bruises (none) and asked me about the injury. We did some head looking to see if there was strain in the neck and yes, there was a bit. He checked my left arm looking for pain. As I had a headache, bit of soreness at the neck, more sore at the triceps and biceps, with some aching down to the wrist, he diagnosed it as whiplash.

He said it would hurt in the morning. Hurt more for the next couple or three days. Then I’d be in some pain by the third or fourth day. He provided a scrip for Valium and a scrip for Percocet. He suggested Valium and a cold pack for the next couple of days if I felt tightness as it would help keep the swelling down and by the third or fourth day, I might need a percocet. I was to evaluate my level of pain and see if I needed it but I was not to try to “tough” it out. Follow the advice and heal correctly.

I did mention that I only had motorcycles now and he said I was to not wear a helmet or otherwise drive (especially if I took the Valium or Percocet as both would make me drowsy) as the additional stress might exacerbate the injury. Take it easy and it’ll get better on time.

The hospital registration person next arrived and advised me on what was going to happen regarding bills and payment. She provided pamphlets and paperwork to provide all the details and some information on what to expect from the insurance company.

I retrieved my license and insurance cards and we headed over to the pharmacy to fill the prescriptions.

I’d sent emails to the team at work and to management to let them know what happened and to request to work from home. As a computer geek, that’s not a real problem and other issues can be dealt with by others on the team.

In the morning I called the boss at his request and we discussed keeping things cool and taking breaks when I needed to, even shutting down if necessary.

Later I received a call from her insurance company. She confirmed it was me, stated they were accepting 100% liability for the accident, and then asked if I’d record a statement answering questions. I didn’t see a reason why not so I agreed.

The questions were mainly confirming my vehicle information, the details of the accident scene such as time of day, direction of travel, and other similar details. She did ask if the woman said anything and I did recount what she had said to me. Once done, she thanked me and said they would be sending someone down to check out the truck; repair or cash payment, they didn’t pay medical as they occurred but would provide reimbursement once all treatment ended (and would call about every 30 days to check until completed), would pay “pain and suffering”, and asked if I wanted a rental. As I only have bikes now and I needed to take Slash to the vet, I said Yes. I said I didn’t need a truck and that any car would be fine with me. She contacted Enterprise, which was in town, and arranged for me to pick up a car. She thanked me for my time and hung up.

Enterprise called me to let me know when I could come pick up my vehicle (4:30). Jeanne gave me a ride down and as the insurance company is paying $26 a day, and Enterprise didn’t have any mid-sized cars, I got some humongous GMC SUV. 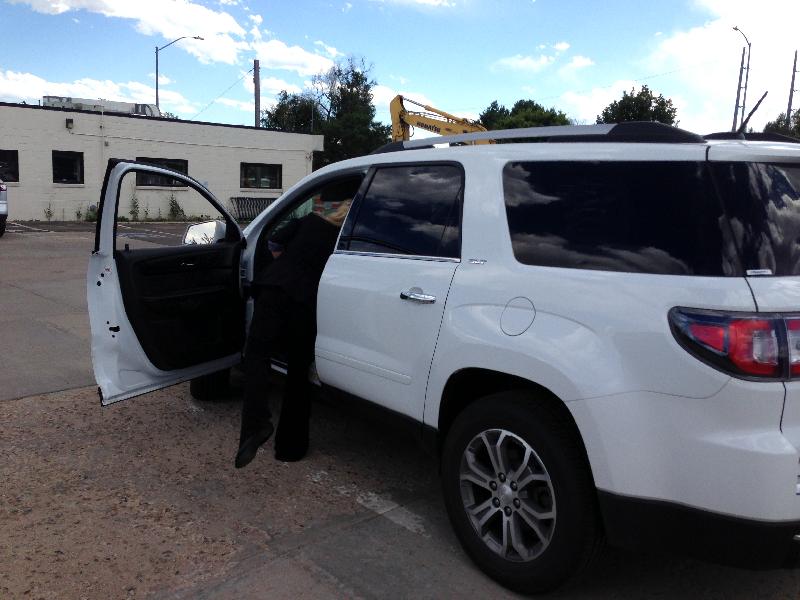 I was afraid to drive it it was so large. Being used to a small truck and mostly motorcycles where I have plenty of room to maneuver, having something this big was far out of my experience level. It was interesting to drive home. I left plenty of space and went slower than some folks would do I guess.

Anyway. That’s the saga to this point. I don’t know how long it’ll take for the truck evaluation and don’t know if it’ll be repaired or simply junked and I’ll have to chase down a replacement. 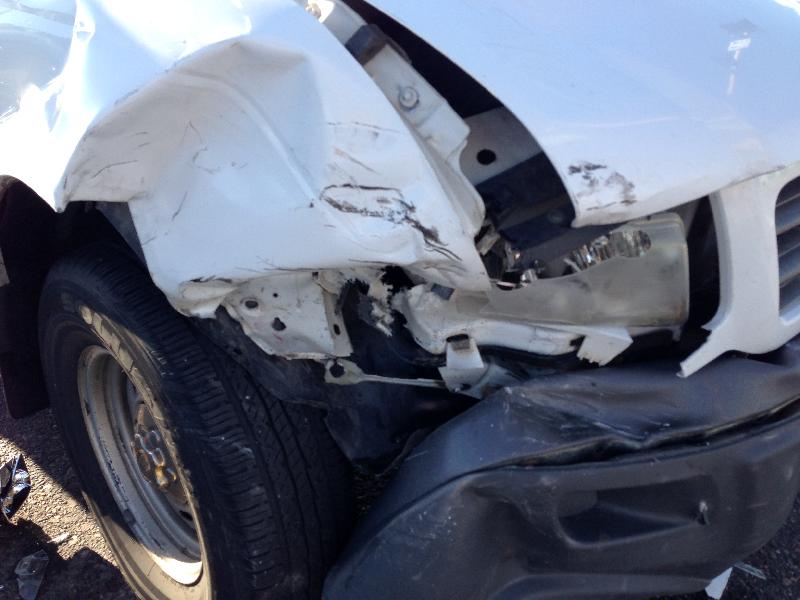 Maybe a Subaru Forester or Outback next time 😀

Oh, and a fun little note. I had my fitbit on at the time and snagged a snapshot of my BPM at the time of the accident. 152 BPM. Whew 🙂 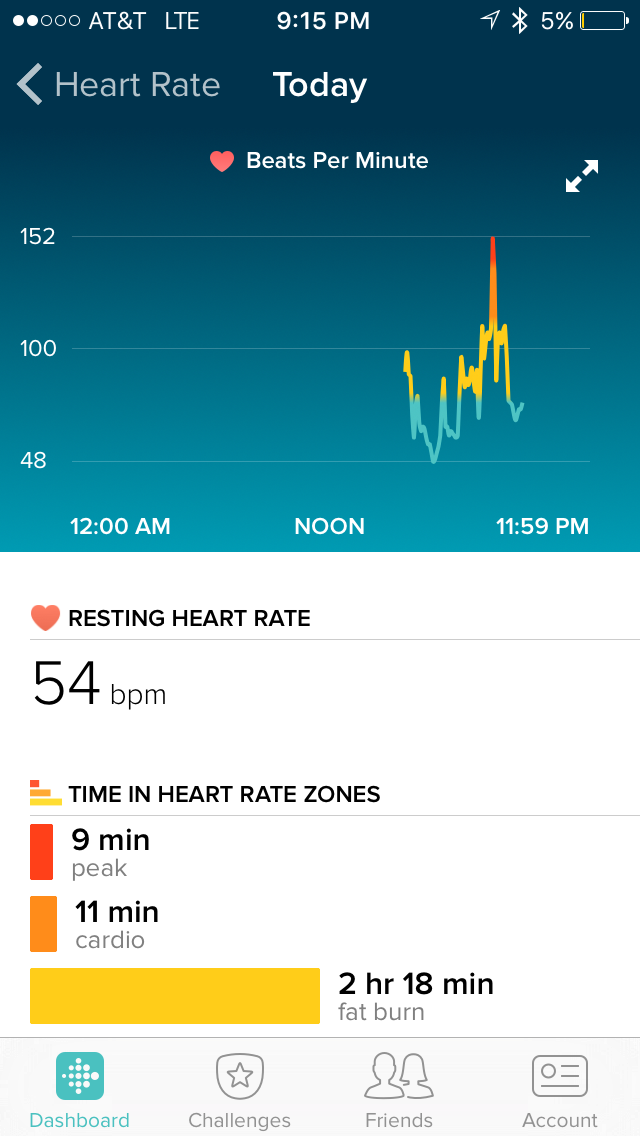 This entry was posted in Accidents. Bookmark the permalink.