A Dice Tower is useful in ensuring the rolling of dice is relatively similar and it keeps dice in a controlled location. I’ve checked out various sites over the years so I’ve had an idea of what I was looking for.

Not long ago, I stumbled on a pretty cool looking dice tower that wasn’t too crazy complicated (in my mind) to build. During the build of the Gaming Table, I took some time out to cut and assemble 5 dice towers based on the following site.

I followed the top two links to pictures but the plans pop up with a Permission Denied. I posted a comment but the last one was in 2011. I reverse engineered the plans and recreated it with my 2″x2″ boards I picked up for this purpose (the board is actually 1 1/2″ by 1 1/2″). 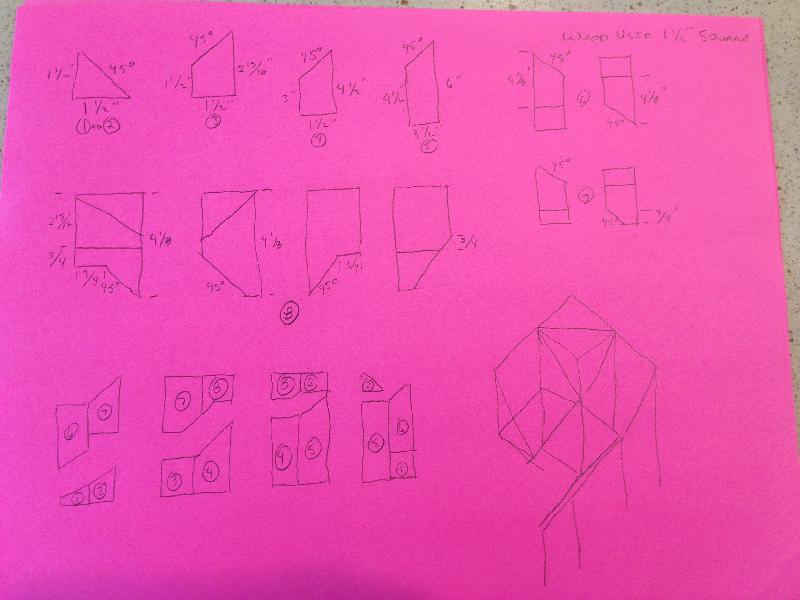 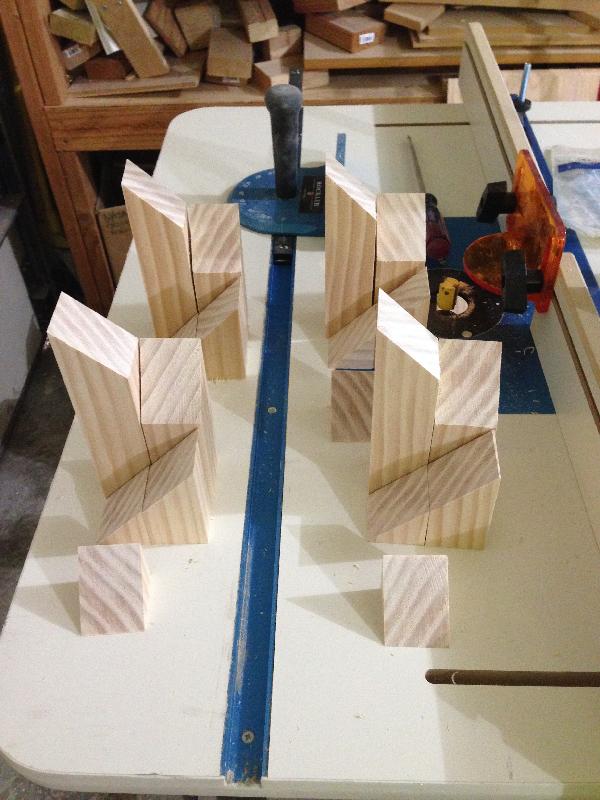 The hardest part was the back top corner piece. It has a diagonal down the face at the same angle as the two adjacent pieces. I whipped up a quick and dirty jig and was able to easily make the cut. The bottom part was a three way cut and was the hardest part of the piece. I have a scroll saw but it was complaining the entire way. I’m thinking of snagging a small band saw to make this easier. The rest of the pieces are simple straight or 45* cuts. One of the links above has a 2d plan with measurements in mm. His tower is about 3/4″ bigger all around and probably an inch or two taller but I like this one.

Glued together. You can see the diagonal angled cut here. it’s not perfect but I have 4 or 5 more to make so I’ll get the hang of it before too long 🙂 You can see the lower part of that piece there and the other one in the next picture. 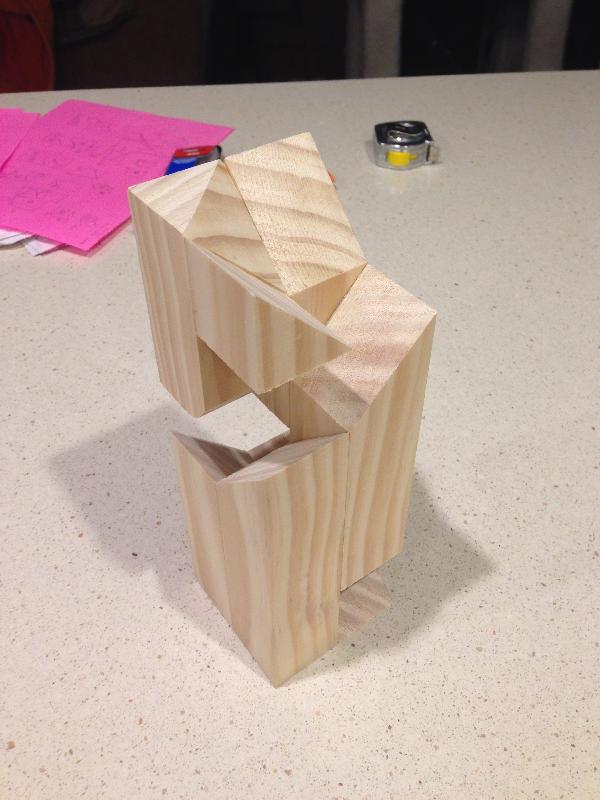 From the back. The top right corner is the harder piece. 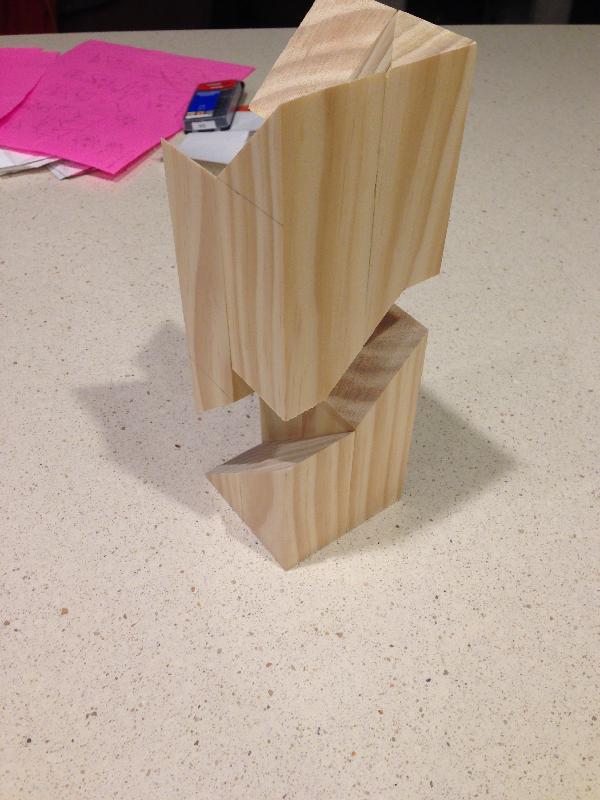 I planned on using plexiglass but the local show will only make single cuts, no custom cuts. I need to get some measurements and plan how to get the plexiglass in place. In the mean time I taped some paper over the openings so I could test the dice. I used a box of small dice and dumped them all in, all came out without an issue. I dumped in a set of polyhedrons and no sticking, all came out without an issue. I finally dumped in some d20 and d12 mixes and again, all came out. Without making a statistical run, it seems to work as expected. 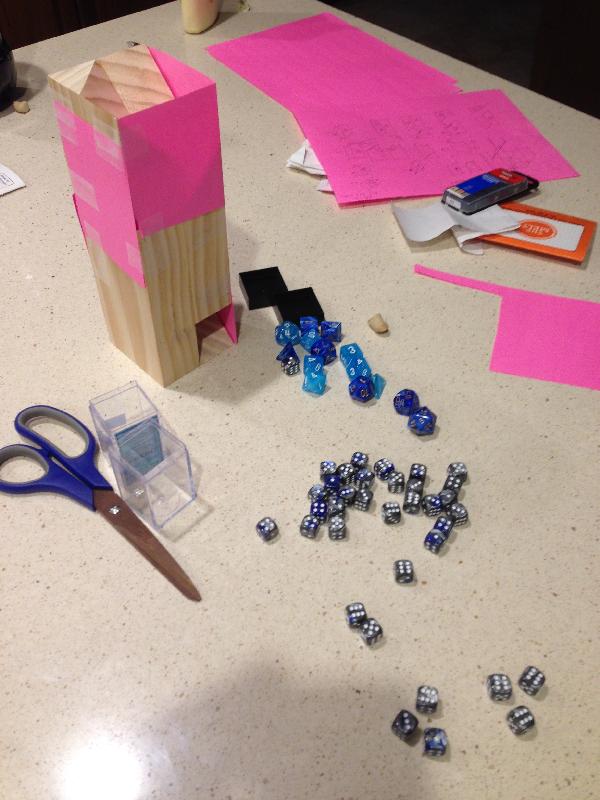 Okay, I have five towers done. I stopped in at our local hardware store. “Plexiglass?” I ask the guy at the desk. He pulls out a selection of 3×5 pieces in various thicknesses and says to provide the measurements and they’ll cut them for me. “Really? I was just going to get a few sheets and cut them myself. Let me get the measurements and I’ll come back.”

More Later: “Here I am.” I measure the pieces. Not perfect but within error limits, I’m cool.

“If you’re going to do this often, we’ll have to charge you labor.”

I’m looking at getting my own table saw blade though. The cuts were apparently using a knife vs a saw.

Now, assemble the plexiglass. Just using clamps to get a feel for how it lays out plus the sides of the tray. I may rip the sides to shorten them a bit. I have a small sheet of the 1/4″ Poplar which I may also rip to make the sides. We’ll see. 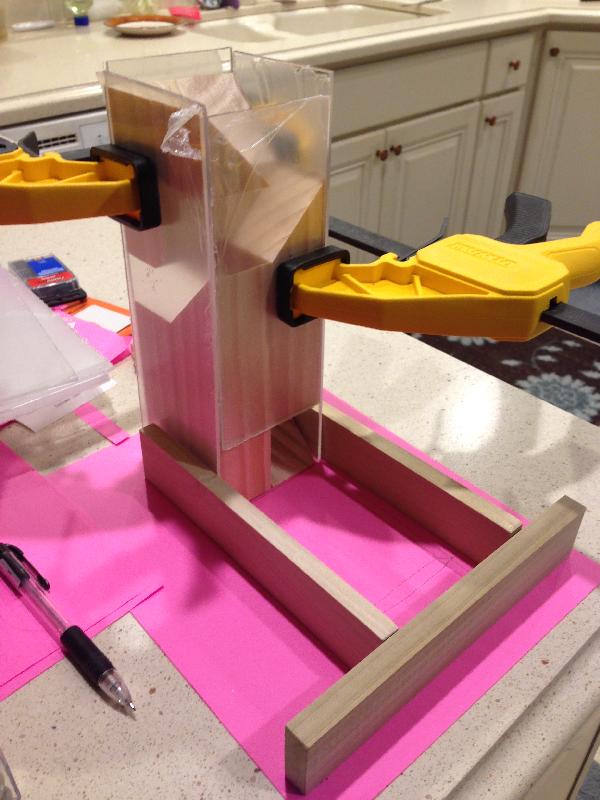 I was going to try and miter saw the edges but the blade is large enough that it really doesn’t work. So I used the scroll saw and did my best keeping it straight. 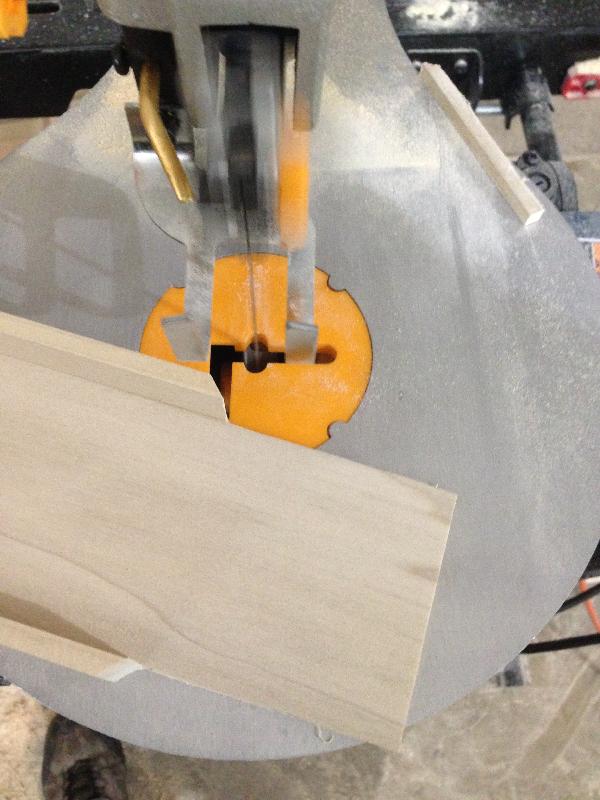 I tried a couple of different sizes for the fence around the front yard of the dice tower but found the quarter inch was what I liked best. I had a long, about 2″ wide piece so I ripped it to 3/4″ and then used a jig and the miter saw to cut the corners. A little wood glue thinly spread with my fingers and they’re set. I also took the tower itself and ran the bottoms of each completed tower through the miter saw to make the base flat. At least one tower (the one on the right here) the ramp ends a little before the fence.

I used my drill press to gradually increase bit sizes to drill holes. Still I cracked the back of one of the pieces. I tried to sand down the edges of the plexiglass. It sort of worked. I’m still poking at it though.

We used the towers Saturday and Sunday and they worked pretty well even though the plexiglass was just taped in place for now.

This entry was posted in Dice Towers, Woodworking. Bookmark the permalink.