The fricking low beam headlight on the Suzuki blew out a couple of days ago. I went to the dealer and picked up a replacement light.

I checked the service manual for the procedure on changing the bulb but there wasn’t anything there on it. I checked the Owner’s Manual and it was there. Simply remove the three fasteners, pull off the plug, pull off the rubber protector, pull off the spring, replace the bulb; being careful not to touch it. Sounds simple?

It took a bit to get the fasteners out. I couldn’t get them out. Finally I got the back two out and realized there were six to remove and not three. Ah well, I pushed up on the front four and popped them enough to grab them with a pair of pliers and pull them out. I only broke one so I’ll have to replace it.

After getting the lower cowling off, I reached up and felt around for the back of the light. You see, there isn’t enough room to actually see what I’m doing. I got the plug off and the protective rubber ring but couldn’t figure how how to remove the spring. It wasn’t obvious by feeling it and since I couldn’t see it. So I grabbed a small mirror and tried to figure out how to remove the spring. Fortunately it looked like it was held in with a screw. Now all I have to do is get in there with a screwdriver. I grabbed one of my small computer screwdrivers and tried to maneuver it in.

After a bit, I figured I wasn’t going to be able to get in there without removing the dash on the top so I broke out the hex drivers and removed the dash. I checked with the service manual first and discovered something. If you push on the center of the fastener, it’ll just drop right out. That needs to be in the owner’s manual. 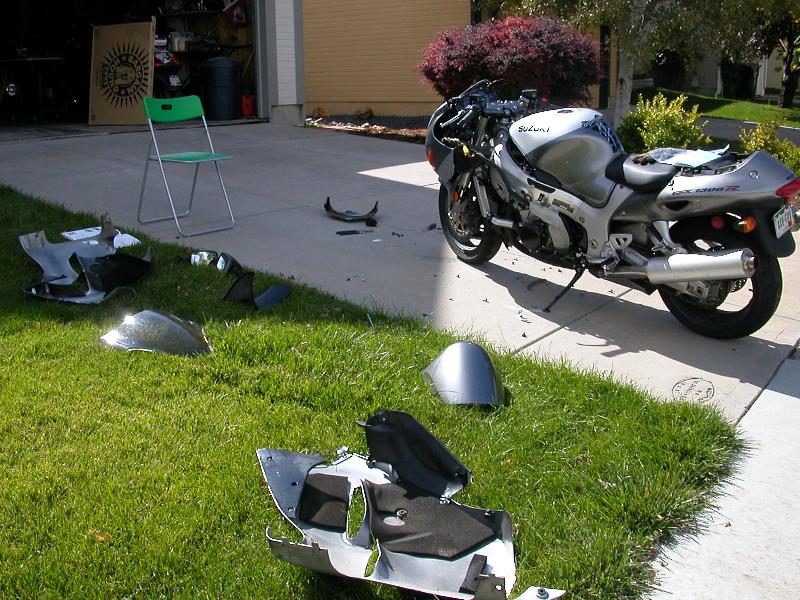 Note that I also took off the windshield.

Now that I can access the screw, the spring pops off and the light bulb comes out without a problem. I carefully replaced the bulb with a good one and put it back in. Unfortunately the spring doesn’t want to go back in and without being able to get two hands in the cramped space, I don’t know what to do. 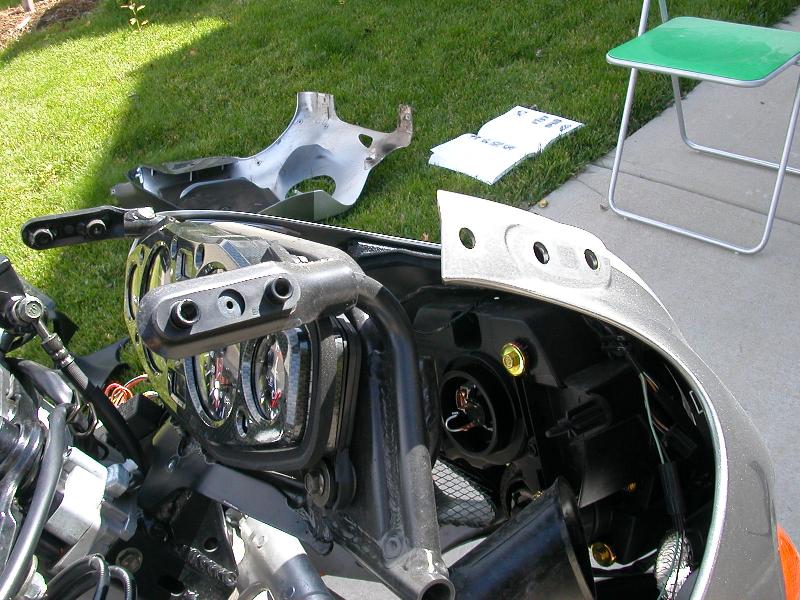 I know, I’ll remove the front cowling. A quick look in the book and I just need to remove the mirrors, the bottom fasteners (which I already removed to get to the lights in the first place), and the six screws (three on either side) that hold the side panels to the bottom of the cowling which I’ve also already removed.

However, it’s not cooperating. The bottom comes off of the air tunnels but there’s something holding on real tight up top. And I can’t find any screws holding things down. After a bit, I decide to take a break before I break something. 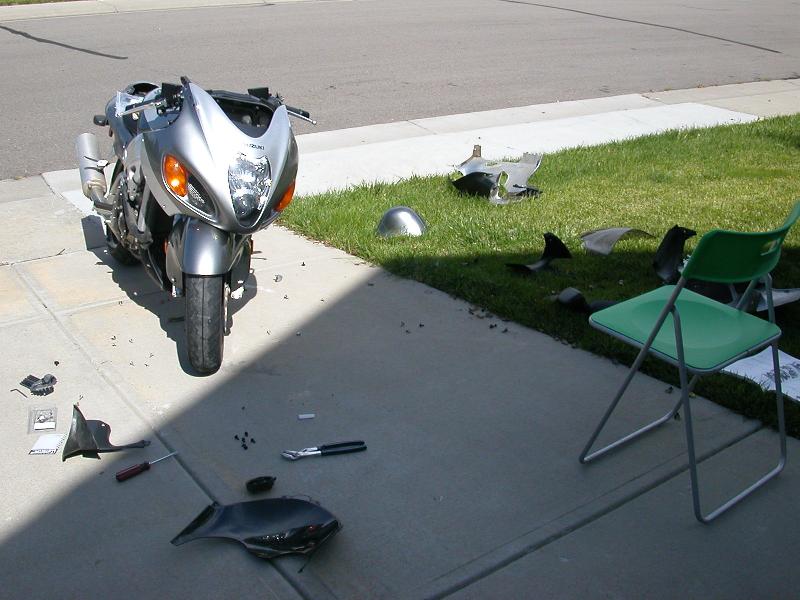 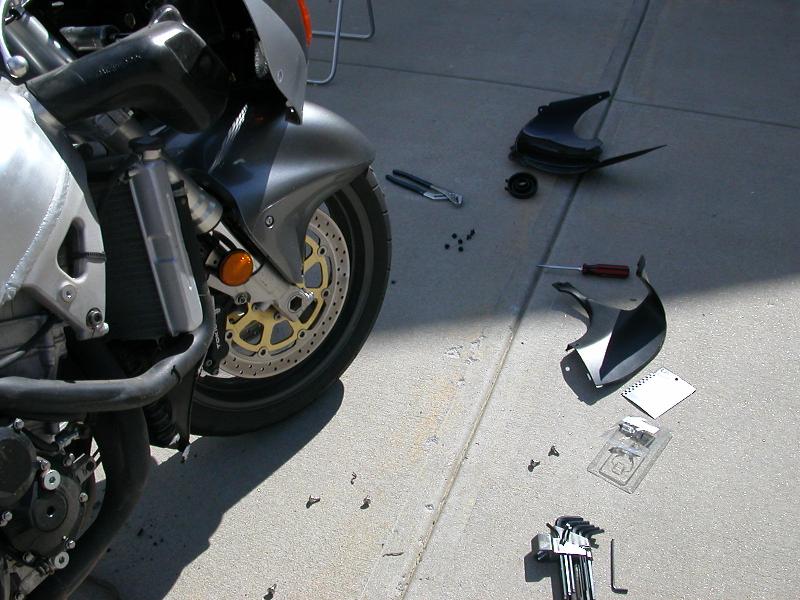 Ahh but finally I figure out that the mirror mounts are holding the cowling in place and I gently pull each side off of the mounts. Unfortunately the piece that holds the right side of the windshield and the fastener for the right dash breaks off but I get the cowling all the way off. Note: the bottom right side has a small silver piece of plastic that seems to be missing from the bottom left side (it’s a darker strip on the left side). The spring seems to not need to have been unscrewed. Nowhere in the Owner’s Manual or Service Manual does it say “the spring is held in on the left side and you just need to pinch it to release the bulb”. Of course, a mechanic who’s probably seen lots of these would know. So I screw the spring back in and fasten it on the left side and put the rubber thing back on and plug in the wiring. 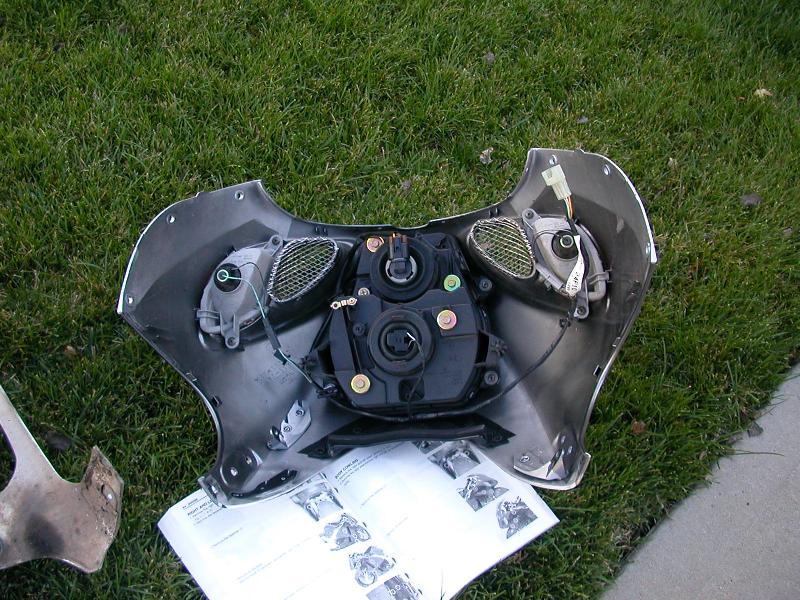 So I call Rita and have her pick up some plastic Testor’s glue so I can put it back together. In the mean time, I screw the spring back in place and put the light back together. Once Rita arrives, I glue it back on and clamp it in place with a spring clamp. Here’s the bike after all the front plastic has been removed. 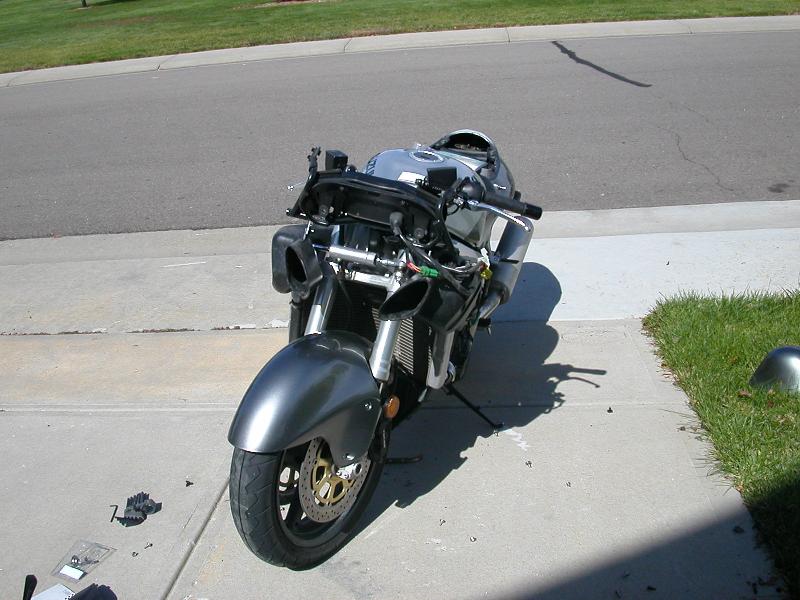 While I’m waiting on the plastic glue to dry, I put the rest of the bike back together. For the fasteners, I pull out the center pieces and put them back in the respective holes. I push in the centers until they’re flush. The rest of the bike seems to go back together without much fuss. I still need to get the mirror out of the engine compartment where it fell and I put the windshield back on. There must be a trick in getting the rubber grommets back in the openings but it’s just a pain to me. I tightened the center screw and the right side dash panel and it’s all back together until the next time the light blows.

Then I’m taking it to the dealer!

This entry was posted in Maintenance. Bookmark the permalink.