The morning ride through Washington was quite pretty. Lots and lots of wheat. Just miles and miles of it. Must take weeks to harvest. Got stopped for construction (pilot car) twice and chatted with the flagman and flagwoman (who had her dog with her). I’d known I was getting low on Plexus, I had a smaller can and it wasn’t full when we left. I didn’t think it would be a problem however we did eventually run out. Plus the thumb of my glove had a hole in it from somewhere. I stopped at a parts place and they didn’t have anything that was of much help and no gloves.

Crossed over into Idaho and Lewiston at around noon. We headed east and south on 12 and stopped in Orofino briefly to see if we could find Plexus and gloves. Plus I’d run out of soap and deodorant. At an Ace, I was able to find gloves but the large size was too small. And no Plexus but they did have Windex Wipes. I put them back at one point but figured if we couldn’t find Plexus, it’d do in a pinch. I also found more soap and deodorant so we were mostly okay.

Still, the Clearwater River was a nice ride and the Dam up the Northfork was freaking cool even though we only got a glimpse. But the river was cool as well. 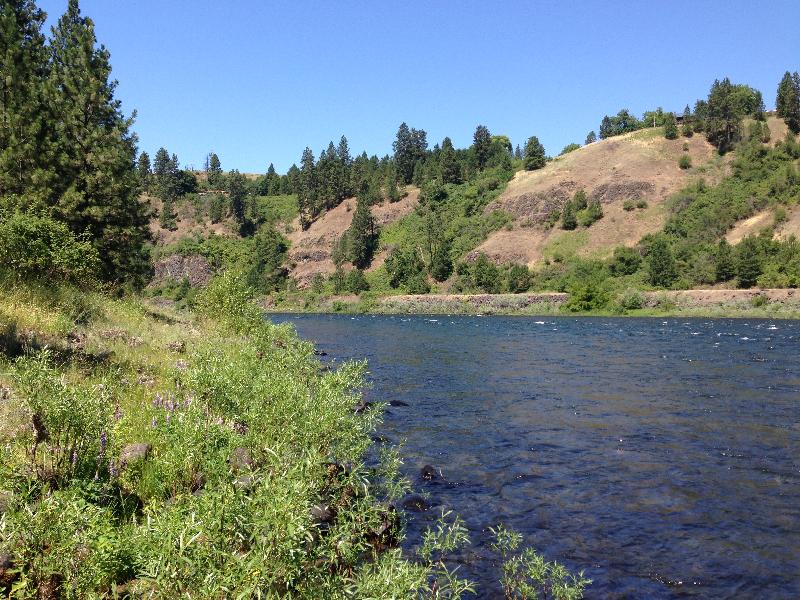 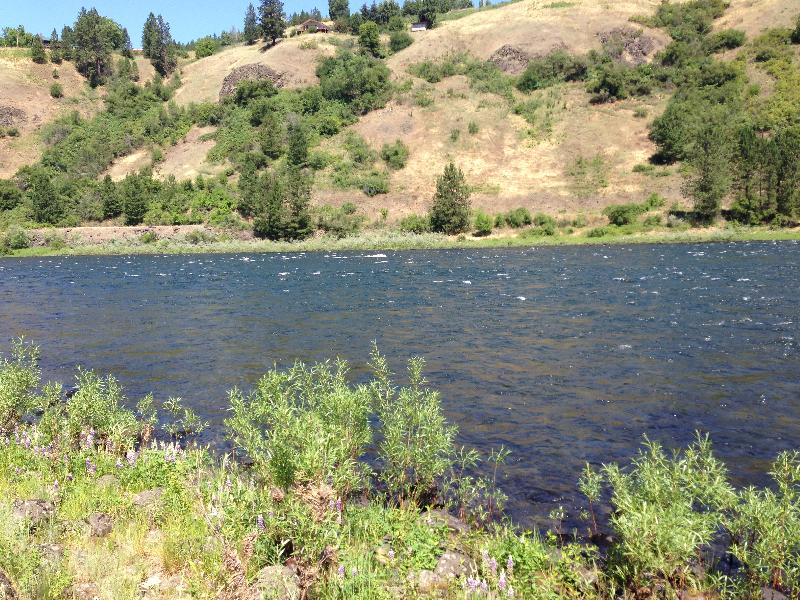 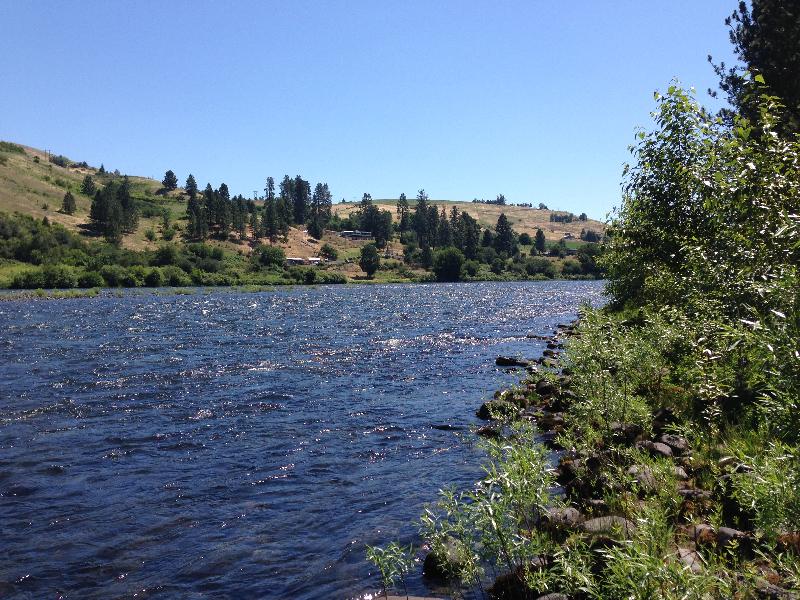 As we continued south, I figured we’d stop at Kooskia to get gas and even passed Kamiah’s gas station however Kooskia was apparently just a couple of closed buildings. Figuring we’d get gas on the way, I continued on up Northwest Passage Scenic Byway. Of course, as fate would have it, the gas station at Syringa, which had “Last Chance gas for 64 miles” was closed and for sale. Well, the bike will do about 250 miles on a tank and we’re at 54 miles right now. We should be able to make it to Lolo on the other side. So off we go.

Northwest Passage Scenic Byway is an excellent ride. Nice sweeping curves and little traffic. I was of course conscious of gas consumption but enjoying the curves and scenery. 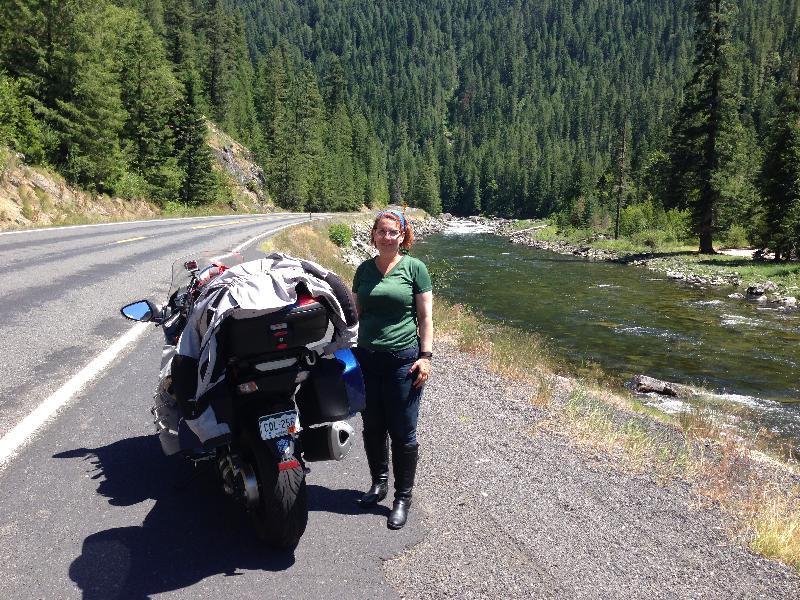 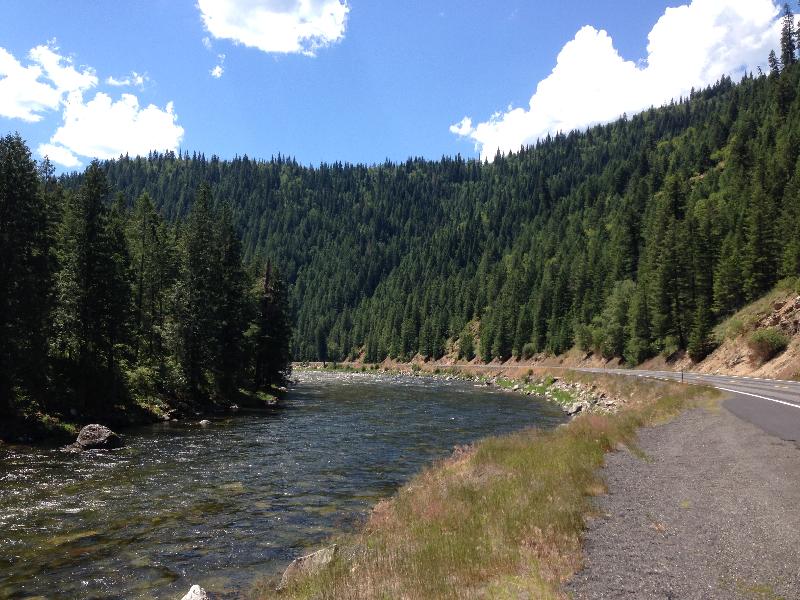 At about 150 miles, we found gas plus snagged a late lunch at Lochsa Lodge. Kind of a cool little spot almost at the Summit. Campground I guess along with gas and a little store. I snagged a couple of hippy moose stickers for the bike 🙂 and then we went back for lunch. 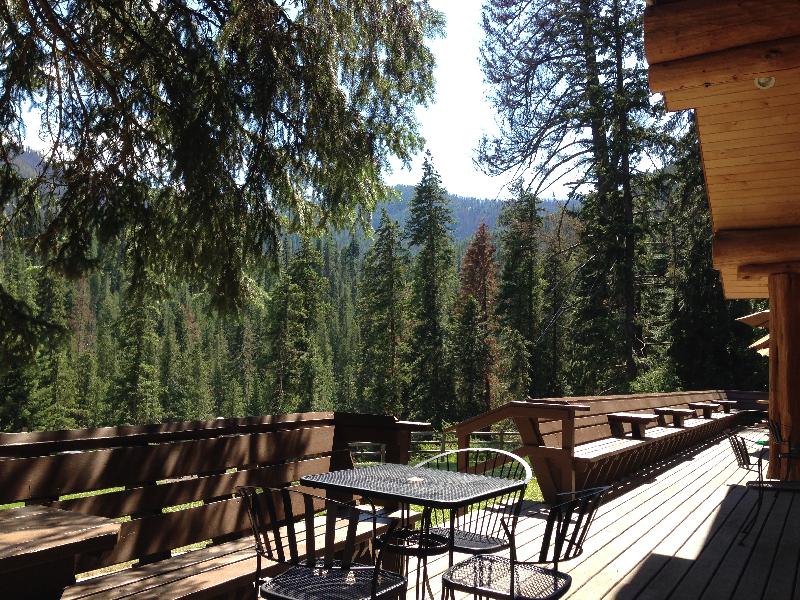 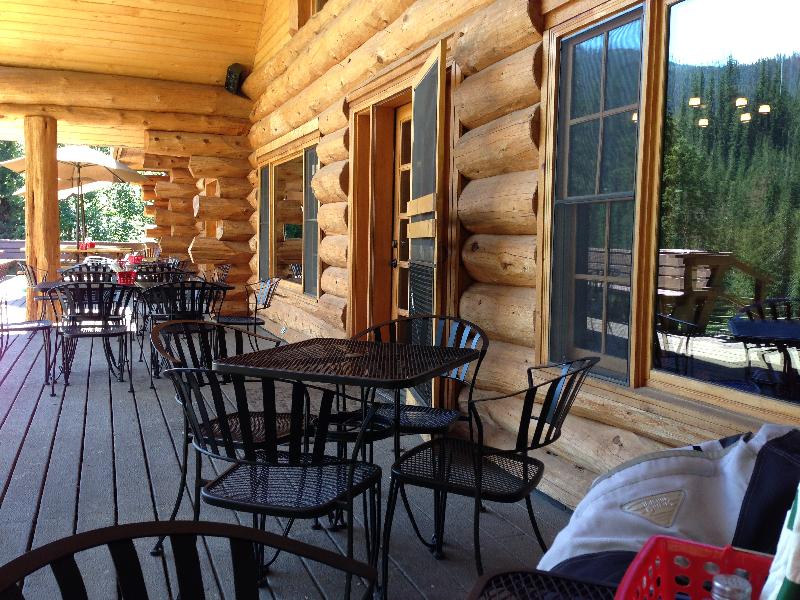 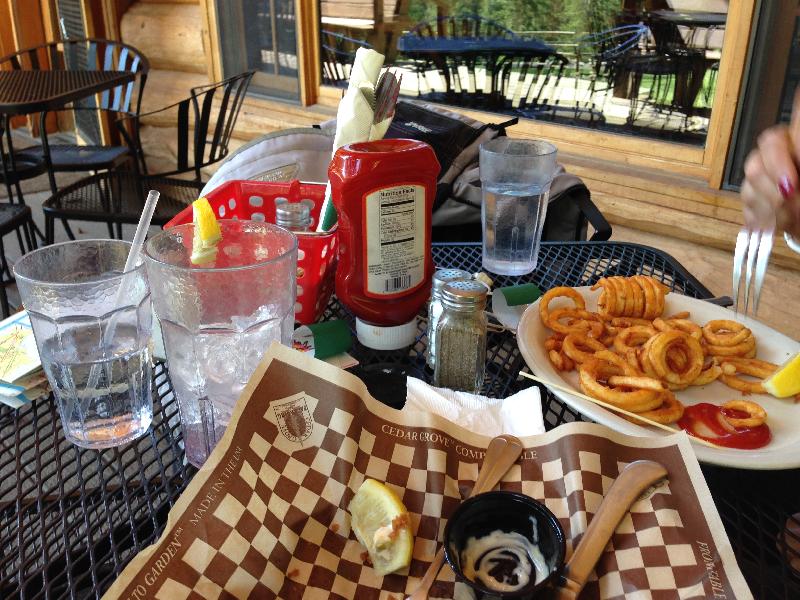 After lunch we continued up the pass. 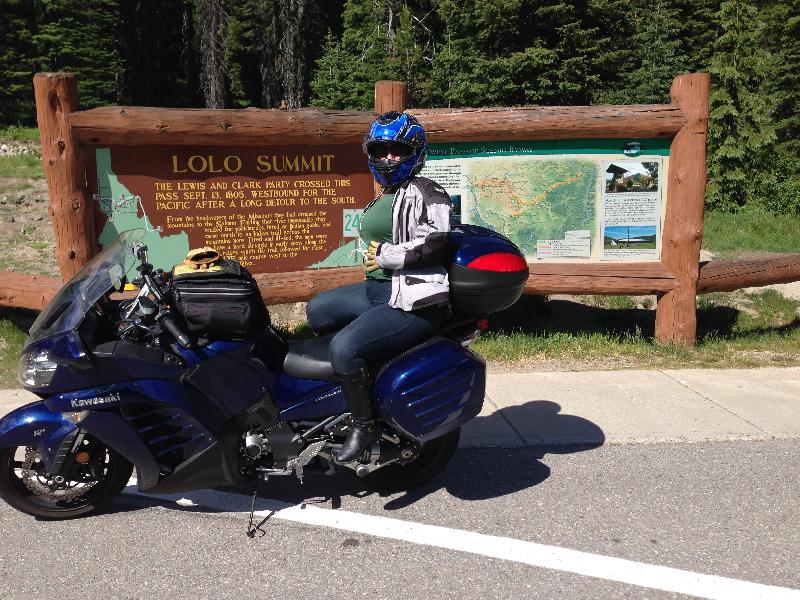 Lolo in Montana was hot and a little busy with traffic. We made the left and headed towards Missoula. The intention was to get on to 90 and west to 93 north but in following 12, we didn’t see any signs for 90. Kept seeing signs for 12 so I kept following it. Followed it through neighborhoods and such and finally decided we’d missed a turn somewhere and made a left onto a one way street. I pulled out the map but it was of Montana so Missoula was just a blob really. So I pulled out the phone. Ah, should have kept going instead of making the left. Pulled out, made a couple of lefts and continued on 12. Sure enough, a few minutes later signs for 90. Stupid 12 🙂

We hopped onto the freeway and headed west to 93 north. Nice little ride through small towns. An hour or so up to Polson and a hotel. On the way though, I think I killed a fairy. All of a sudden 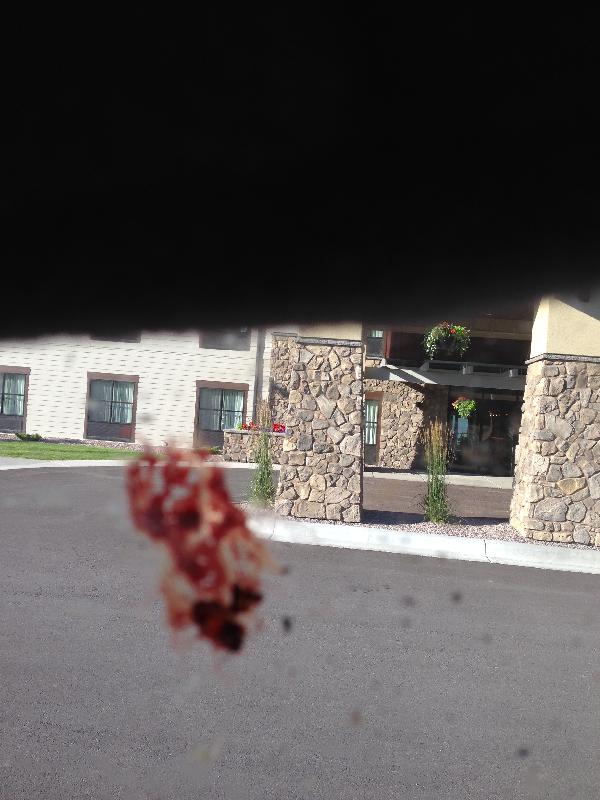 Man, what the heck was that? I didn’t want to try and wipe it off as I wouldn’t be able to see. I haven’t had such an insect blocking encounter since Virginia and the big June Bug encounter! 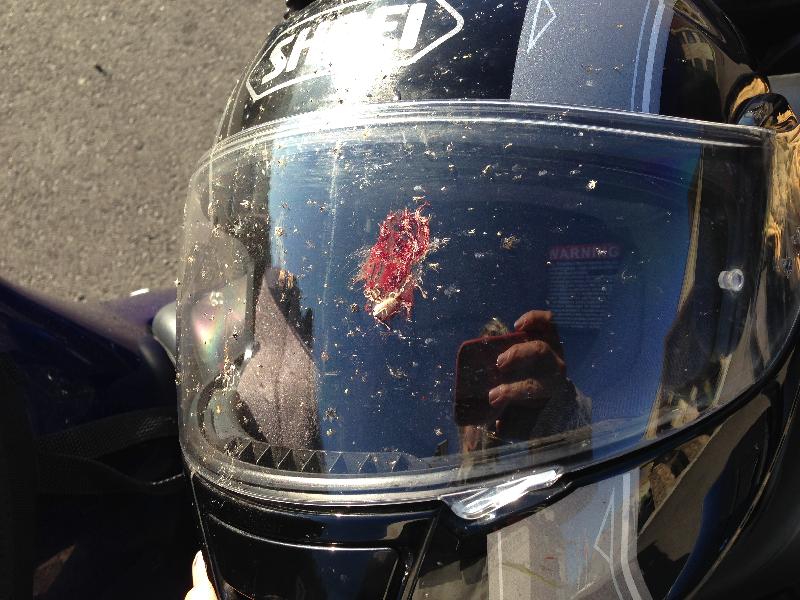 I have no idea what it was, but it certainly left its mark.