Bailed Billings at 7:15 as a roughly long day was expected. We are headed for Bear Tooth Pass and The Medicine Wheel.

General riding is good. Comfortable temps and light traffic. At one point a guy on a Harley came up behind me. I gestured to him to pass and he moved up a little then kept at the same pace I was going. Eventually we got behind a long run of cars and an RV. He passed when he could but he didn’t have the speed in a couple of places. Eventually at a long straight where he’d hung back, I pulled out to pass, passing him and two cars, an RV, a guy pulling a boat, and three more cars. 🙂 We stopped in Red Lodge for gas before heading up and he waved as he went by 🙂

The ride up Bear Tooth was cool, down to 48, with construction in places. I almost undercut a curve and forced the bike into the right direction. The bike just doesn’t quite handle like the busa. It’s a bit tall and the front seems to be a little unstable at times. Probably partly due to the amount of stuff we have loaded as well. I need to take the bike up into the hills without much of a load.

Anyway, got to the top and wandered around for pictures of the scenery and of course, the local fauna (chipmunks 🙂 ). We chatted with a few riders about distance and direction. 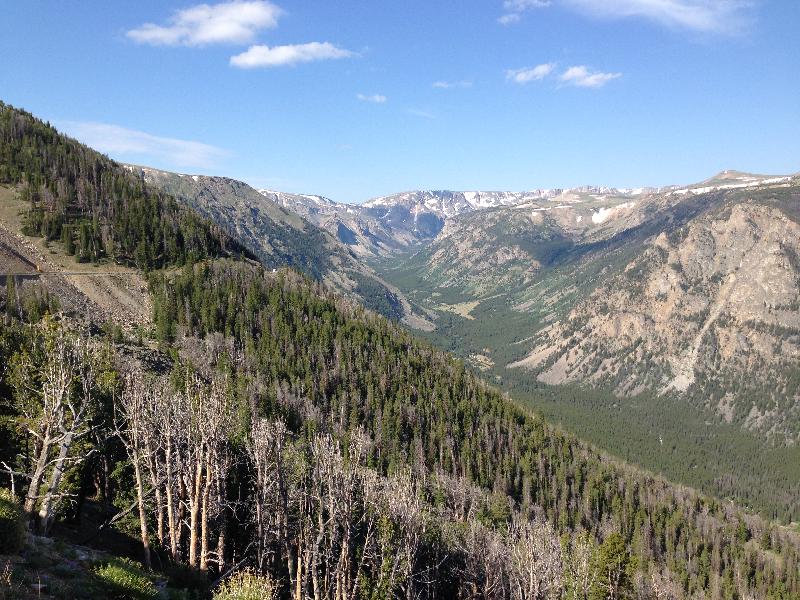 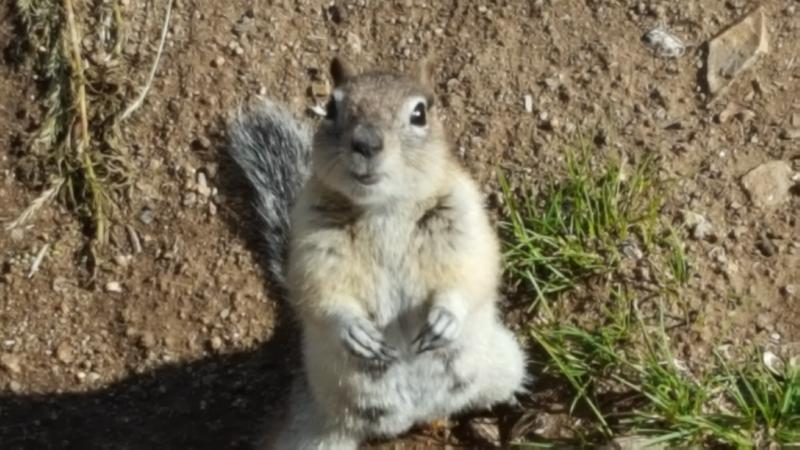 On the way again and we were behind an RV but they pulled over at the first curve.

Up and over the top. Snow in many places. We saw mountain goats. Really nice scenery. At one point I saw a nice lake and stopped the bike for a look. 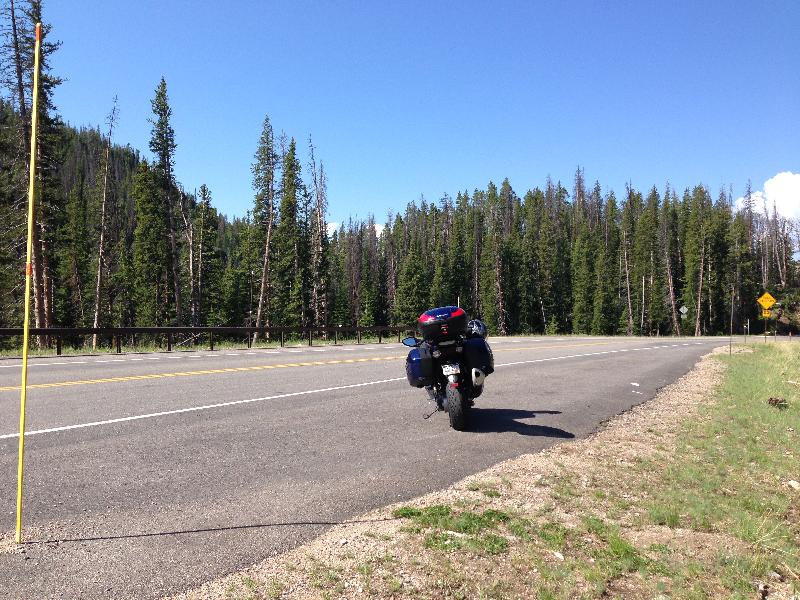 Sure enough, nice view and a guy was out there fishing. 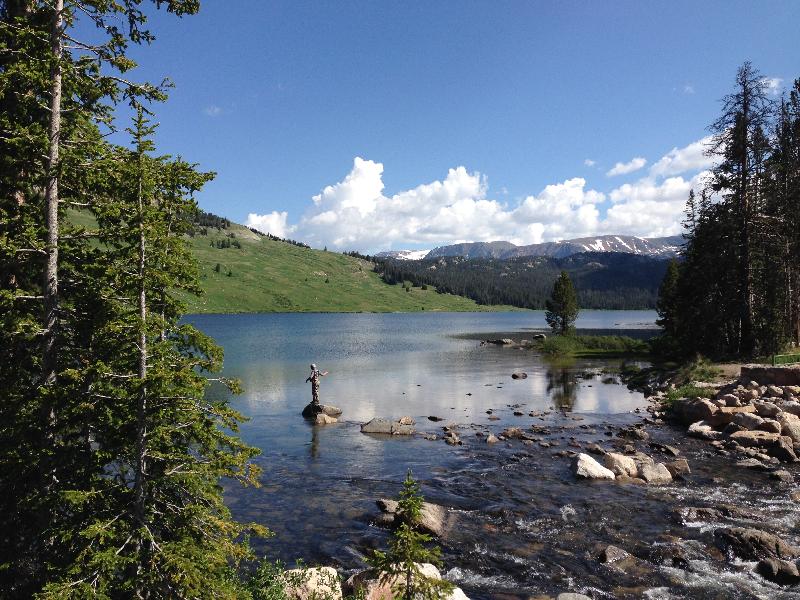 Down the other side and to the bridge over the gorge. Chatted with another group of riders before heading off again.

Bird in a tree. 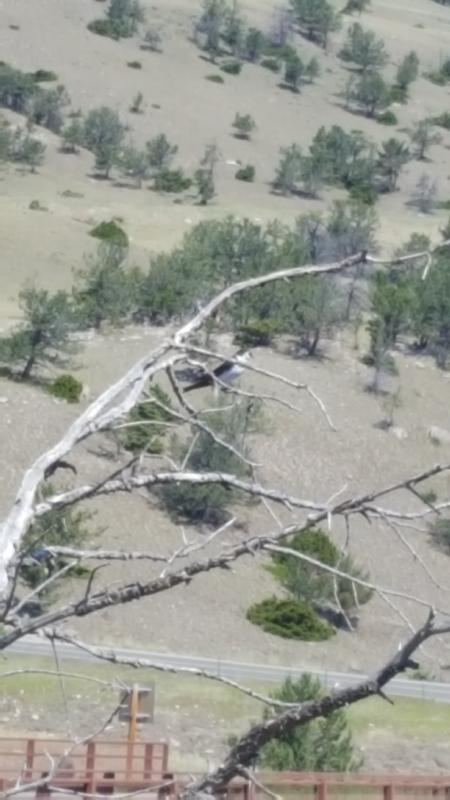 This was the ride up before heading down into Cody, and could have been a bit more fun. Got behind a couple of Harleys, woman on the back bike. She seemed a bit tentative in the corners and barely, from my vantage point, kept from dragging her floorboards. They pulled off at the pass for a few pics as we did. The ride down to the intersection to Cody was less fun. Lots of tar snakes. One of the first curves and the bike danced all around. So I kept it slow until the end. Just before Cody, we stopped for gas and the same group we met at the bridge pulled in as we were resting and we chatted a bit more. One of the guys pulled up on a Goldwing so there was a mixture of bikes.

After, we headed east on Alternative 14 for Medicine Wheel. On the way I spotted a dead deer. There have been a lot over the trip but this was followed up about 20′ later by a white minivan on the side of the road with the front caved in! Need to watch out for the wildlife.

I’ve been here several times to visit. It’s been here for an estimated 10,000 years and is a sacred site. I’ve seen vehicles from Florida.

“Are we done here?” Jeanne is a bit tired of riding I think. It’s been a long trip so far and she’s dealing with it pretty well but occasionally I can see she’s tired 🙂 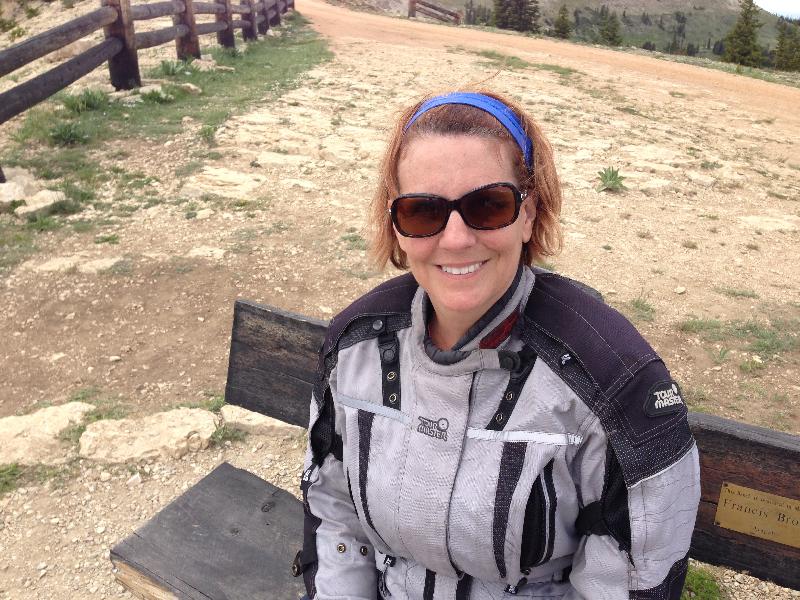 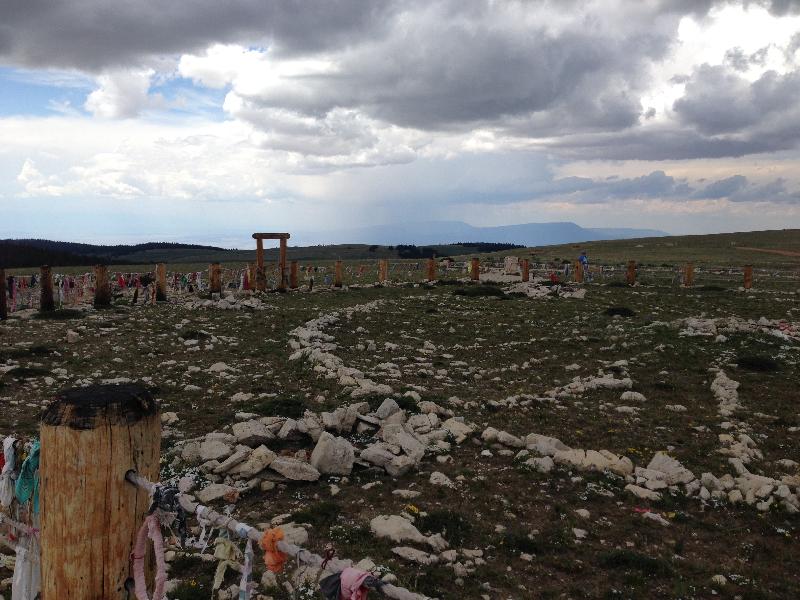 Still pretty cool. As we started back, it started raining a little, then hail! We just walked back to the bike but gear was wet so it was a cold ride. We made it to the lodge, signed in, got our room. 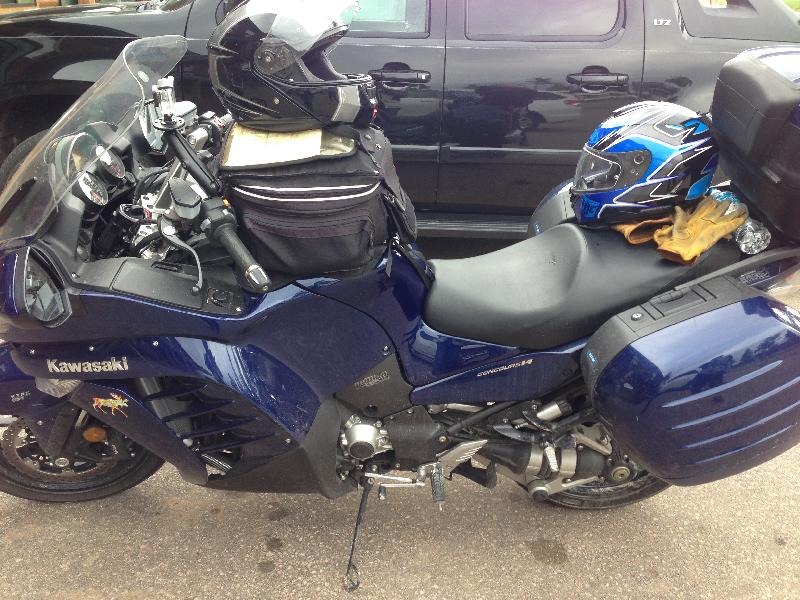 Lunch snack and dinner (dinner’s not until 5). I must say the food was very lightly seasoned.

Humorously, the place is for sale, $700,000. Jeanne and I discussed selling our houses, unnecessary gear, and buying this place. 🙂 It would satisfy my need for a mountain place and Jeanne’s need for water as there’s a small lake next to the place.