Since it doesn’t exist without pictures, I have a few to share 🙂

A few years back my front end was making a weird sound and rubbing but only when I made a left turn. I went to a Colorado Sportbike Club Maintenance Day in part to learn more about proper suspension setup but also to see if anyone could figure out what the problem was with the front end. It took a brief ride up and down the street for someone to have an idea. Turns out the left bearing had bailed. The guy at the maintenance day actually knew what he was doing and he took care of getting replacement bearings (fully sealed this time) and dust seals. I came by to watch as he put the bearings back in so I was knowledgeable in case it happened again. 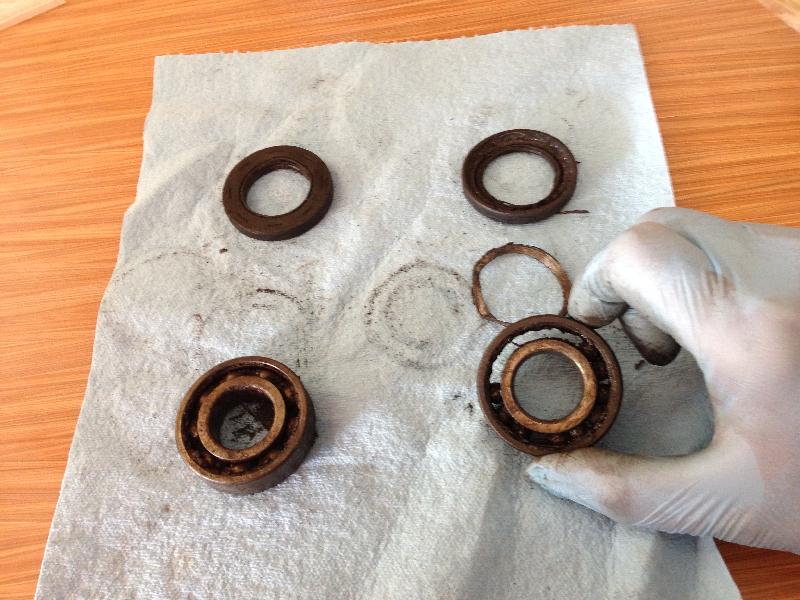 Recently I had a similar issue. I was riding home and heard a click and slight bump bump bump. I pulled the front tire to manually check and the inside seat on the bearing moved just a little. Comparing it to the other side showed it shouldn’t move at all. When I removed the dust cover, look what I found: 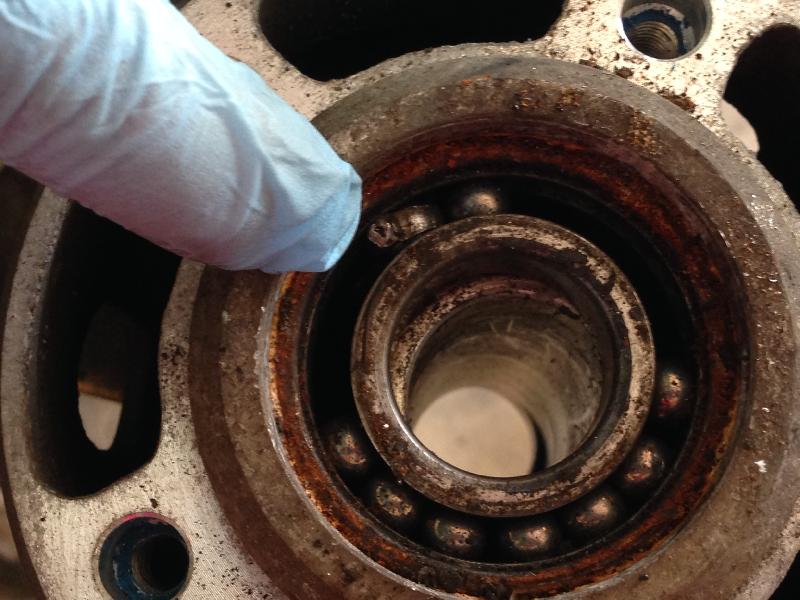 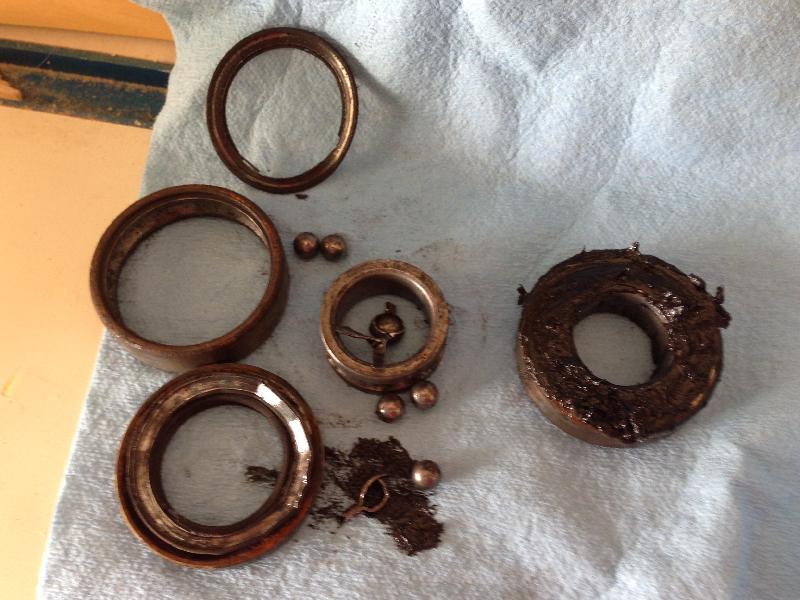 Same here. The one on the right side is still just fine, still with the packing grease. The one on the left is in pieces 🙂 The top ring actually dropped into the center and over the center spacer to shine it up. While it looks somewhat in poor shape, it’s just a spacer between the bearings. 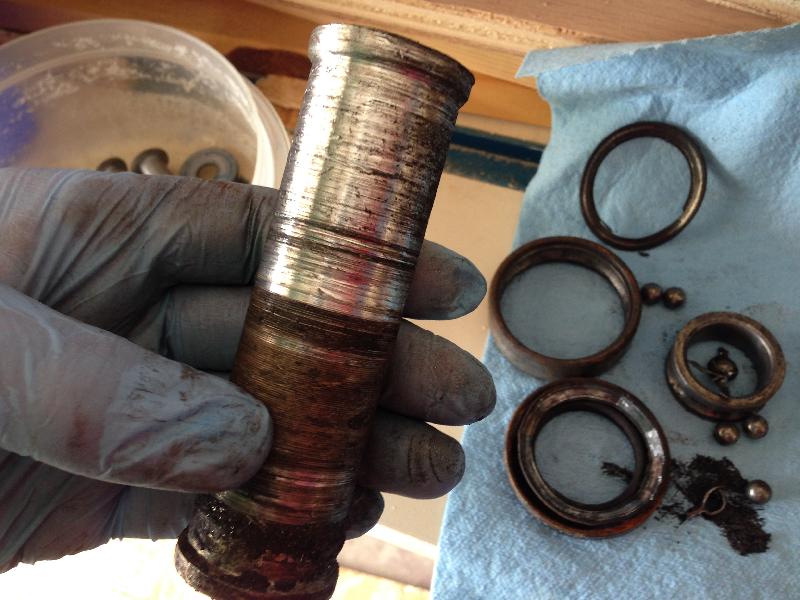 I chased down a set of replacement bearings on line (the same type again of course) and ordered a pair of new dust covers from the local dealer. The front bearings are 6205 bearings. The suffix determines whether it’s a Sealed, Rubber Seal, or other type of bearing. These bearings are ‘shielded’ and not ‘sealed’ bearings.

Bearing seals and shields have been available almost as long as Ball Bearing themselves. However, the move towards more integrated bearing structures has meant that their importance has grown, moving them from occasional add-on items to intrinsic parts of the ball bearings which they protect. In some applications, the seal or shield is becoming an integral part of the bearing design rather than an extra that is added later.

The main impetus towards sealed or shielded bearings comes from the growing use of sealed-for-life bearings in items such as white goods, cars and power tools. Seals or shields are needed to stop the grease lubrication used in these bearings from leaking out. This is particularly important in applications where grease leakage may contaminate the product.

In most operating environments though, the requirement is twofold: to keep the lubricant in the bearing, while stopping moisture, debris and other contaminants from getting in.

Of course, while the seals and shields are providing their protective functions, the ball bearing is spinning, often at high speed. If its operating life is to be maximised, one factor that needs to be considered is the frictional effect of the seal or shield on the bearing starting and running torques.

Technical literature on seals and shields often blurs the differences between the two and the areas where one or the other should
be used. Essentially, shields are non-contact metallic (carbon or stainless steel) devices which allow high-speed operation but offer limited protection against the ingress of moisture and dirt.

Shields have no contact with the bearing inner ring, hence their low torque qualities. This structure also means that they are generally unsuitable for applications where the ingress of moisture is possible. But shields are better than seals at resisting damage from solid airborne contaminants, such as small flying stones.

Seals can be either contact or non-contact types. The former provide better protection than shields, but with reduced speed capabilities, while the latter can be used at higher speeds as well as offering the improved protection.

The most significant developments in recent years have taken place in the area of seals. Traditionally, ball bearing seals have been contact types made of rubber, usually with a metal backing. On smaller bearings, the seal is often made of glass-reinforced Teflon and is fitted using a snap ring.

Both types are effective at keeping out water, liquids and fine particles. However, the speed at which the bearings can rotate is constrained by the friction between the seals and the bearing inner ring.

The precise fit of standard contact seals means that a small vent hole is needed to ensure that a build-up of pressure in the bearing does not “pop” the seals and release the lubricant.

The challenge in recent years has been to develop seals which combine high levels of sealing with the high-speed capabilities of shields. NSK, for example, developed its V type seal for this purpose. In contrast to conventional seals, these non-contact devices are held in the outer ring of a bearing by the elasticity of the rubber seal material. With this design, friction is not a problem, so the bearings can be used at similar high speeds to those fitted with shields. However, compared to shields, V-type seals provide better grease sealing efficiency and resistance to fine dust particles.

V-type seals were originally developed for use on computer spindles, where high reliability and quiet operation are essential. Their use has since extended to many other applications. For instance, they have helped to ensure that the world long-track speedway champion has not experienced a single bearing failure on his bikes for four years.

Falling between the standard contact seal and V-seals is a newly developed class of light-contact seals which allow high-speed operation – although not as fast as shields or V-type seals. However, these seals (known as DW) perform far better in terms of moisture and dirt ingress protection.

They also offer advantages over the standard contact seals. The support for the main seal lip is long and thin, resulting in light-contact and low-torque operation. Starting torque is approximately half that of a standard seal, and running torque is also lower. In addition, the main lip touches the beveled portion of the inner ring seal groove where, if there is centrifugal force, dust is moved outwards. These seals therefore offer good dust resistance.

The main ring also has outward contact with the inner ring seal groove, so internal pressure does not open the seal and allow grease leakage to contaminate a process or impair the long-term operation of the bearing itself.

The trend towards sealed-for-life bearings has almost created a situation where the primary function of a seal is to retain grease rather than to stop contaminants getting in. This is certainly the case in “clean” applications such as in white goods and integrated automotive parts.

However, in adverse operating environments, the primary function of the seal reverts to protection. Often in such conditions, the protection provided by the standard seals is insufficient and specially developed types must be used.

In the most arduous environments, triple-lip seals can be fitted to protect a bearing and extend its life. These seals offer the highest levels of protection with three sealing lips making contact with the bearing inner ring. This configuration results in lower operating speeds, but in typical applications such as agricultural machinery, this is not usually a problem.

With Jeanne’s help, I put the new bearings and dust covers back on. I used a long threaded rod with three large washers on each end and bolts to seat the bearings. 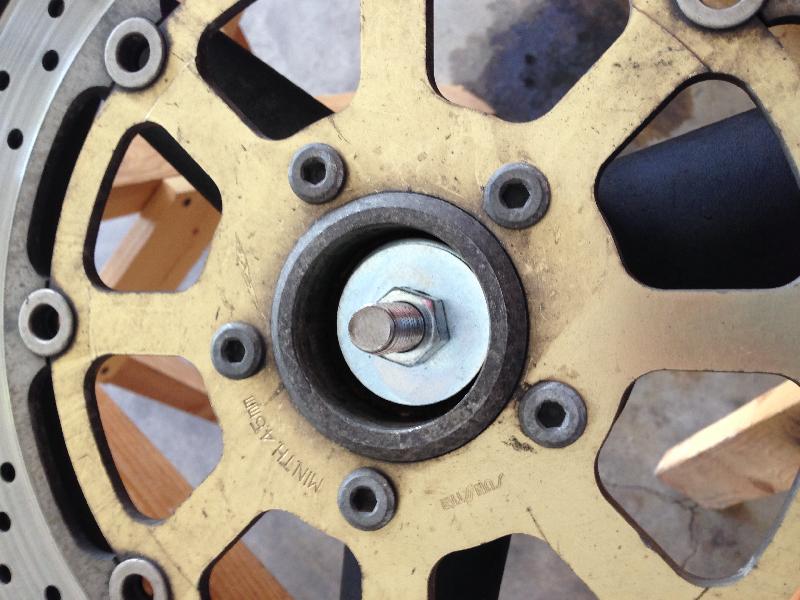 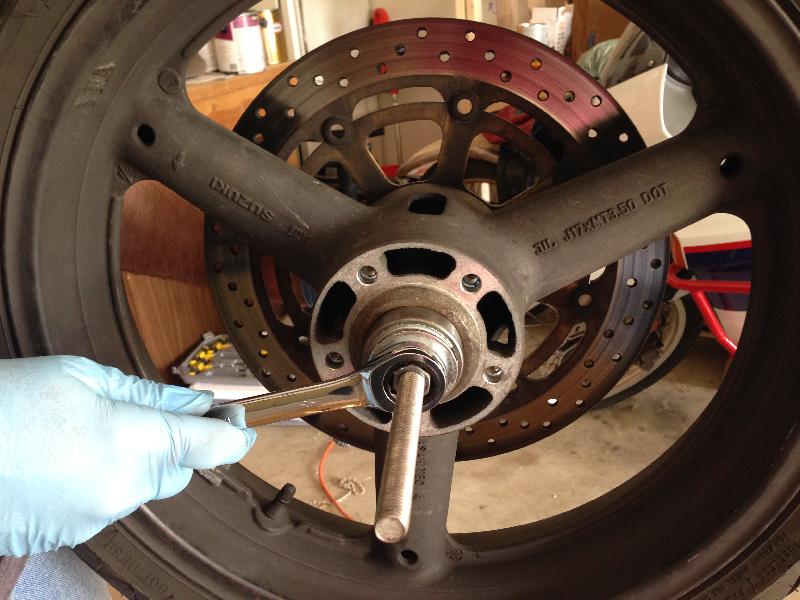 The seat went in just a bit off kilter. I snagged a hammer and lightly tapped the edge to get it straight again and it slid right in. 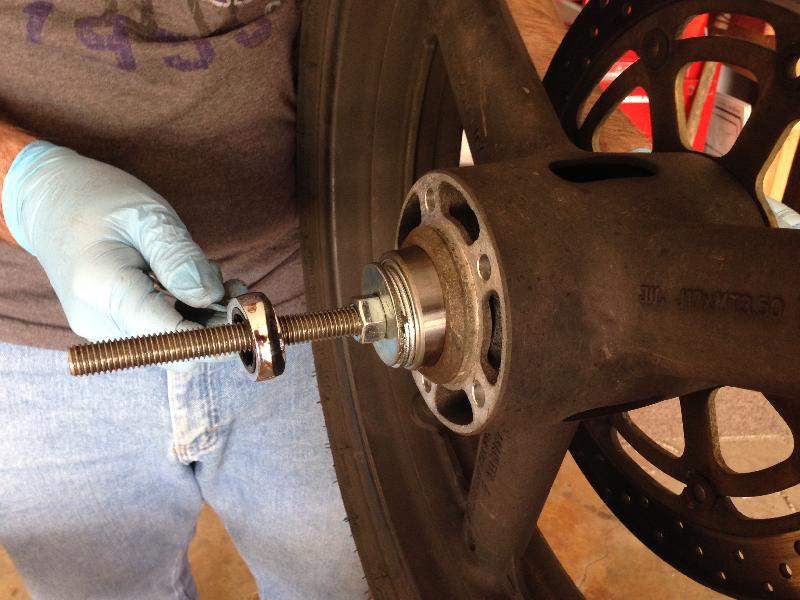 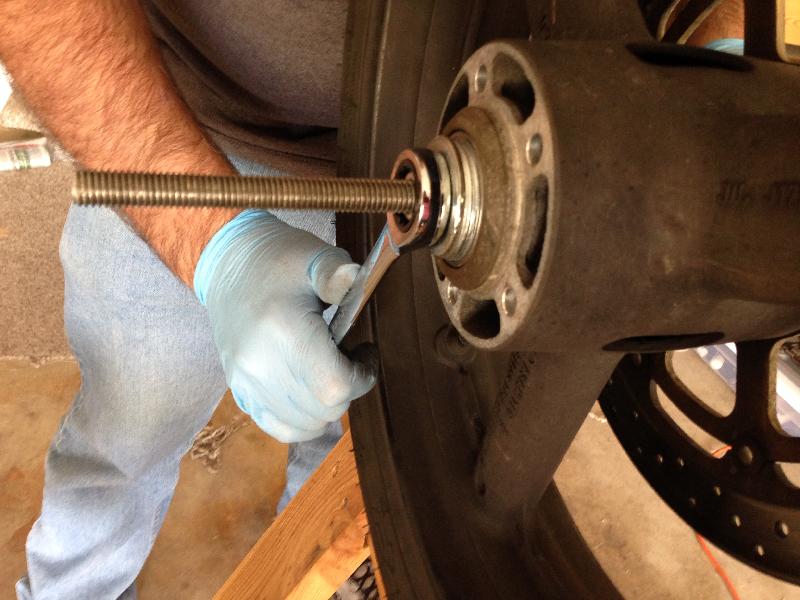 Looking good, ready for the other side. I decided to put the pressed seal on the outside thinking that if it failed, it might not slip inside and muck up the center piece again. Or I’m just a little OCD and decided it should be on the outside 🙂 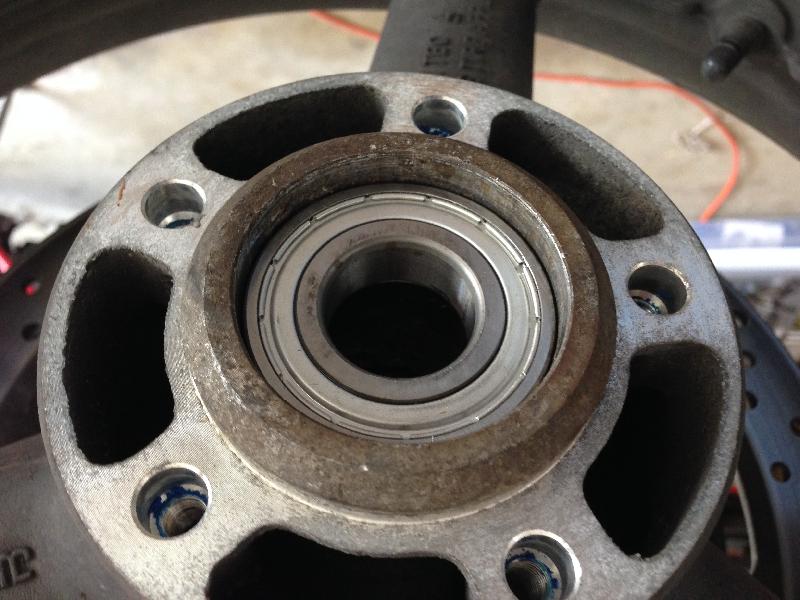 And the other side went on with ease. 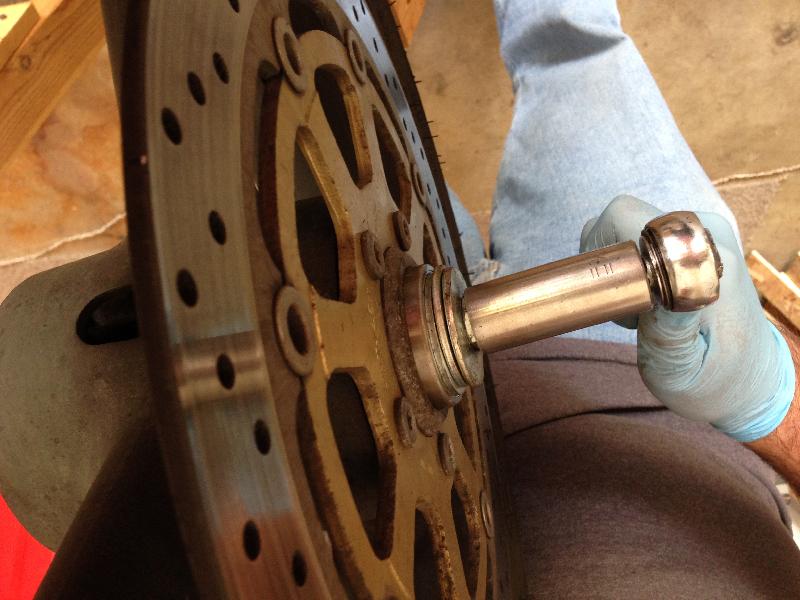 I tried to use the same washer and threads for the dust cover but it didn’t work as well as I though. So I just lightly tapped it in on both sides with a hammer. 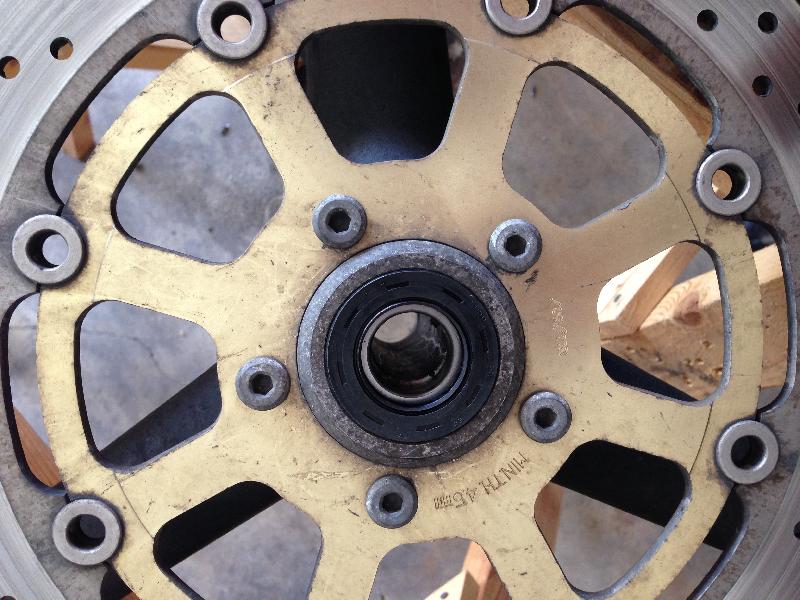 Since I was trying to figure out how to remove the dust cover, I had removed the left side rotor. So I had to put it back together. No problem with some blue loc-tite 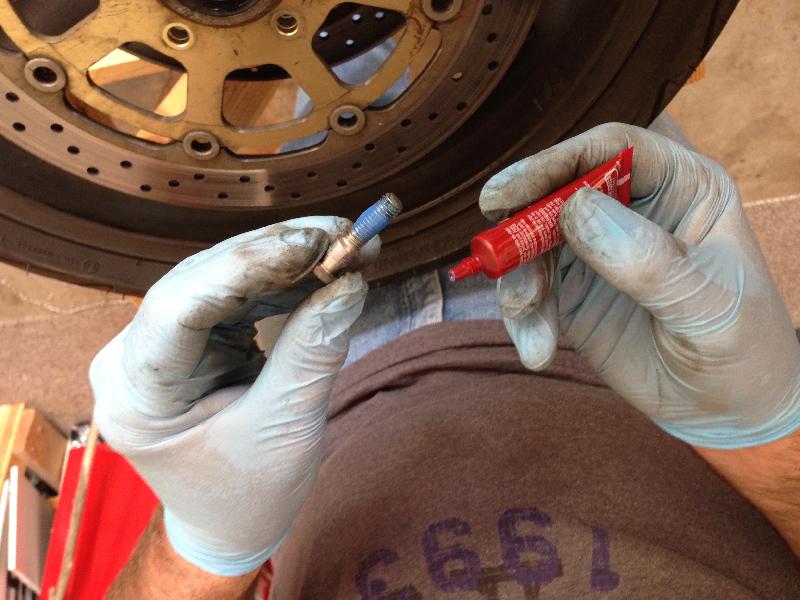 I put the front wheel back on, again with Jeanne helping (she took most of the pics 🙂 ). 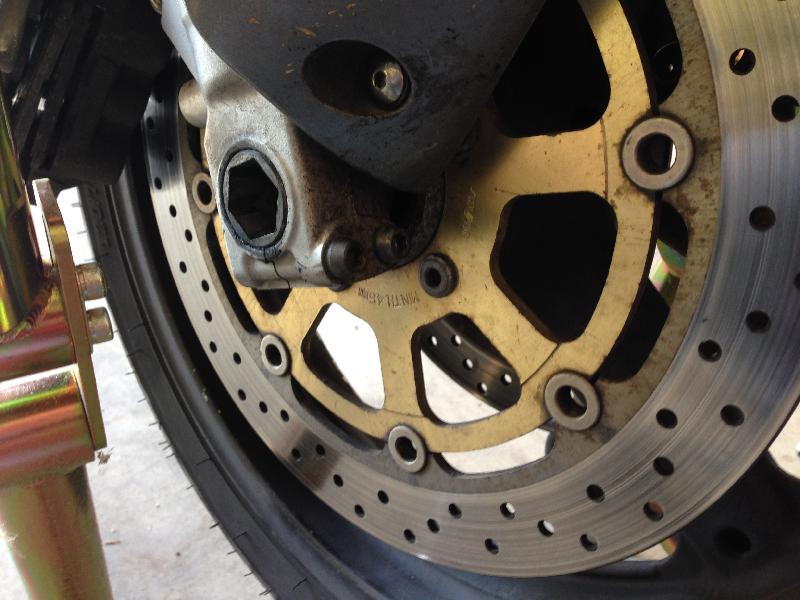 And away we went. Took a ride up into the mountains, down Peak to Peak to Nederland and back through Boulder to the bike dealer to get her a helmet and check out the C14.

This entry was posted in Maintenance, Motorcycles. Bookmark the permalink.

One Response to Bearing Replacement