Got up bright and early Saturday morning and ready to head out. We’ve been checking the weather and it looks to be somewhat cloudy and even the occasional rain. We do have rain gear (my suit is water resistant) and colder weather gear since we’re heading north. Lowest overnight temp was 34* in Jasper so we are prepared. It’s a touch chilly so I have my over rain coat on and Jeanne has her gear plus my rain pants as it blocks the wind entirely so keeps you a touch warmer (keeps the heat in).

I’ve gotten help from friends to keep an eye on Slash and the house. Don’t want him lonely with me being gone. 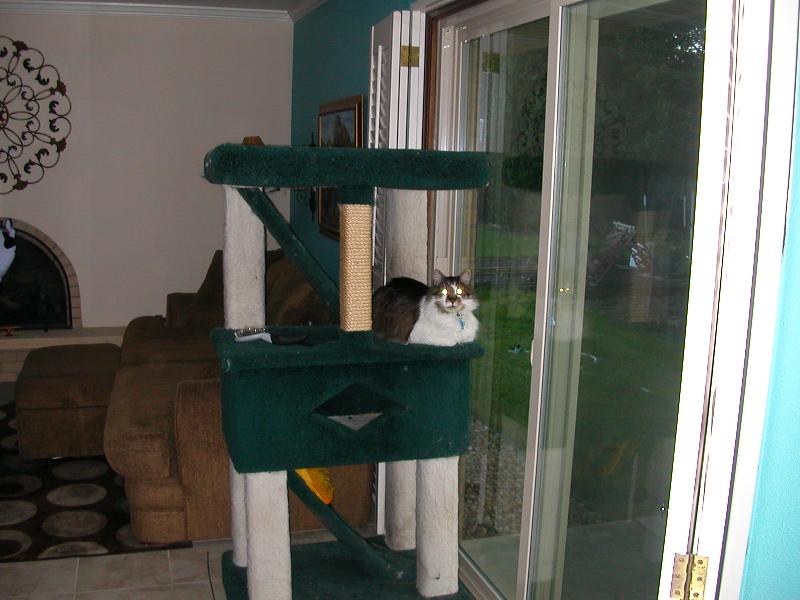 Got the bike set up and ready to go. The tank bag looks a bit taller but it isn’t that bad. It comes up under my chin and still below the wind stream from the front of the bike. The tail light/brake light is visible from the rear so no worries there and the gear doesn’t weigh all that much. Two sleeping bags weigh in at 3 lbs each so it’s all fairly light. Just bulky. 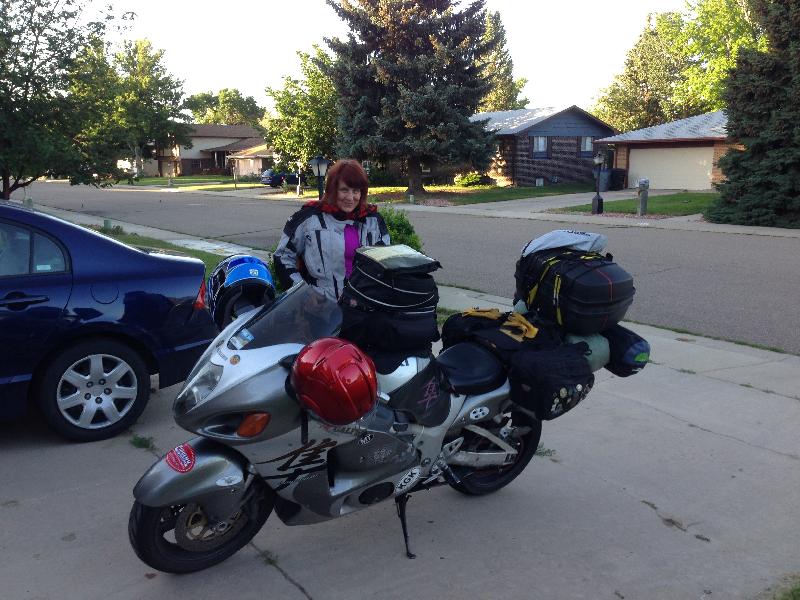 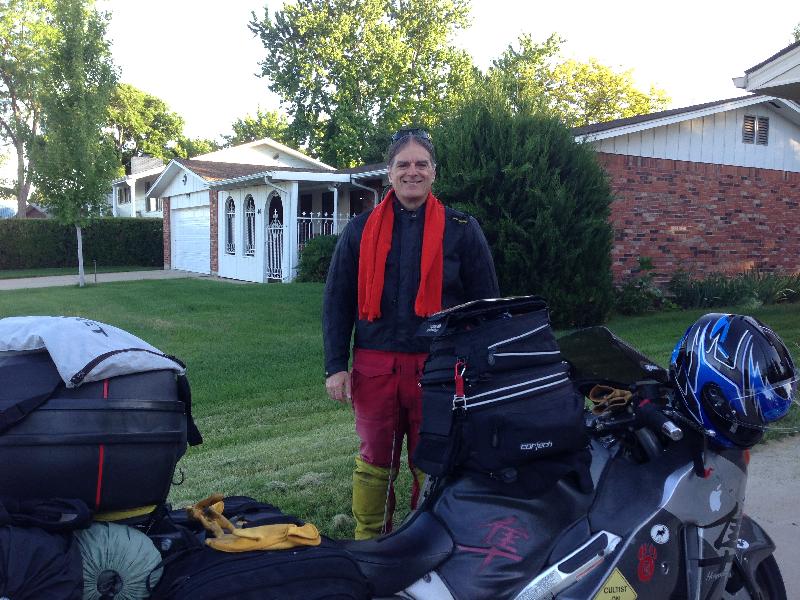 We headed north on I25 intending on making the left to head west on I80 just at Cheyenne heading to The Grand Tetons. I expect to make it to the camp ground near Moran Junction before 6pm. The bad thing is the winds are crazy. There are 35mph gusts and the wind pushes pretty hard. My gas mileage for the day averaged 38mpg. Generally trip averages are closer to 46mpg. I figured I’d get less due to Jeanne being on the back but not 8mpg less. We got to one of the rest areas on I80 and pulled off just to take a break from the wind. Check the flags. They’re straight out! 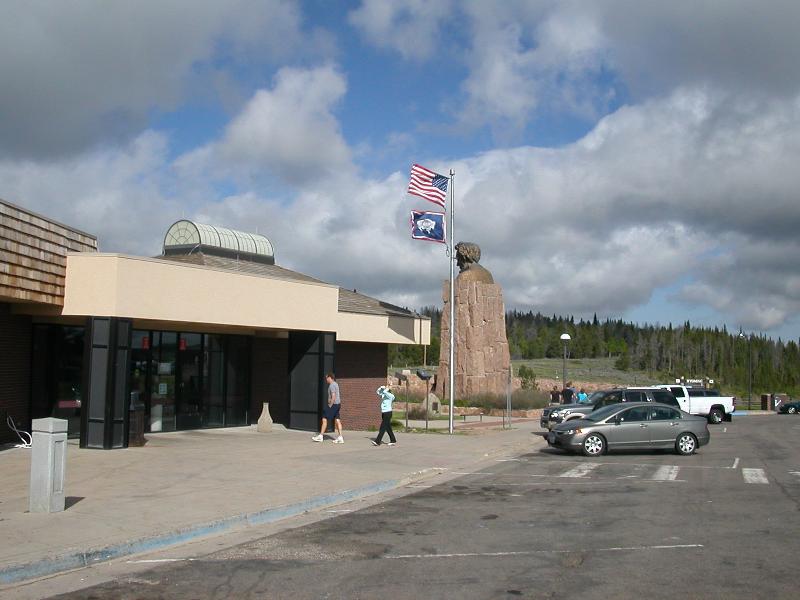 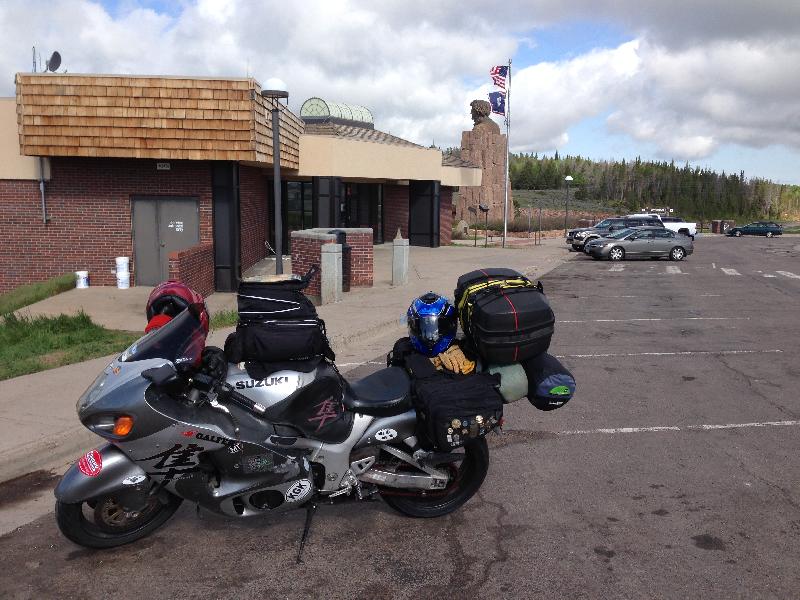 We made several stops for breaks due to the heavy winds plus it was a bit on the cold side, colder than we’d expected. I figured there’d be some chill but it’d warm up through the day but no such luck. And it constantly looked like rain. We did seem to miss a majority of the rain though. 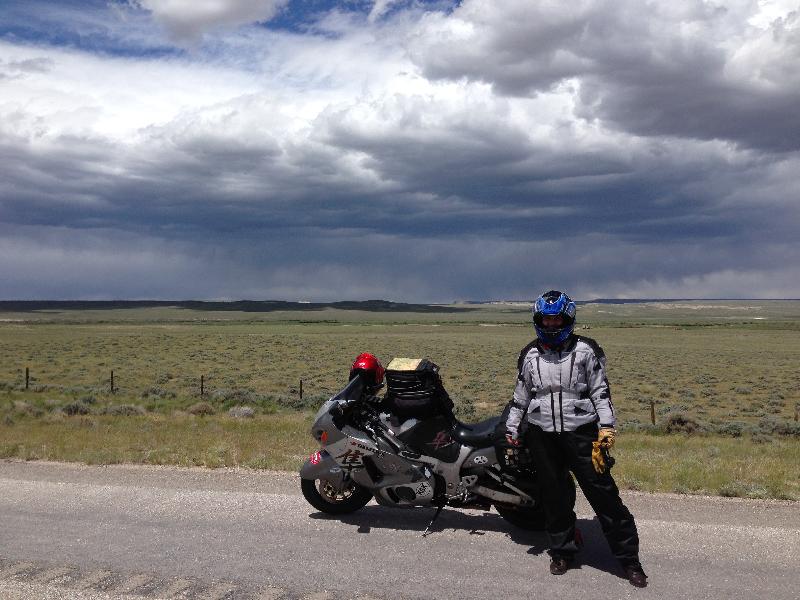 On 287, on the Wind River Indian Reservation, we ran into a quick stop while the road was being worked on. About 5 minutes or so total. I hopped off and snagged a couple of pics. 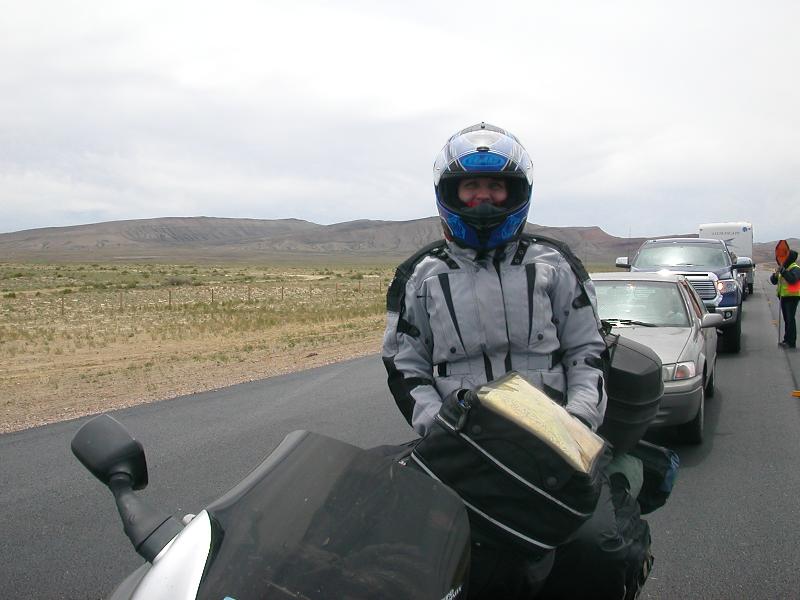 Towards the end of the Wind River Indian Reservation, I spotted a nice pic where the clouds were low enough to be called fog. 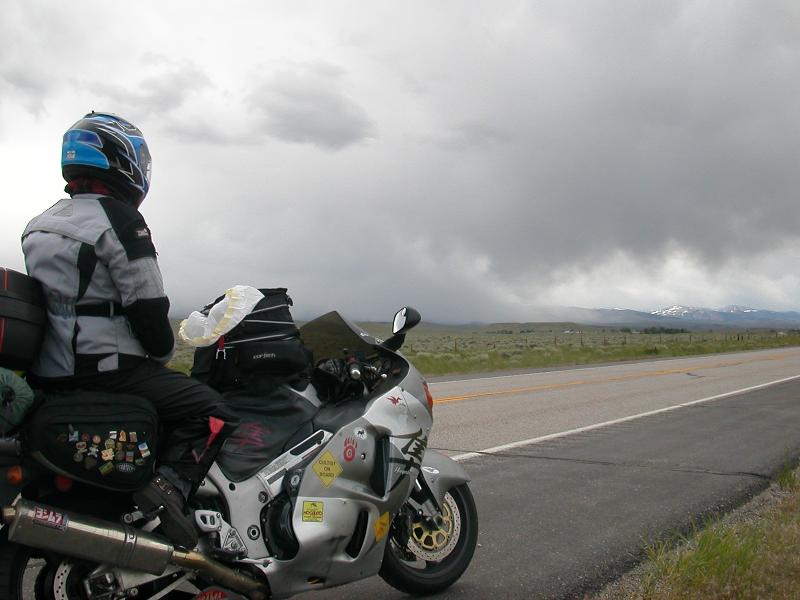 As we headed into the Shoshone National Forest, we decided to stop in Dubois for dinner. It was an interesting Cowboy Cafe place. 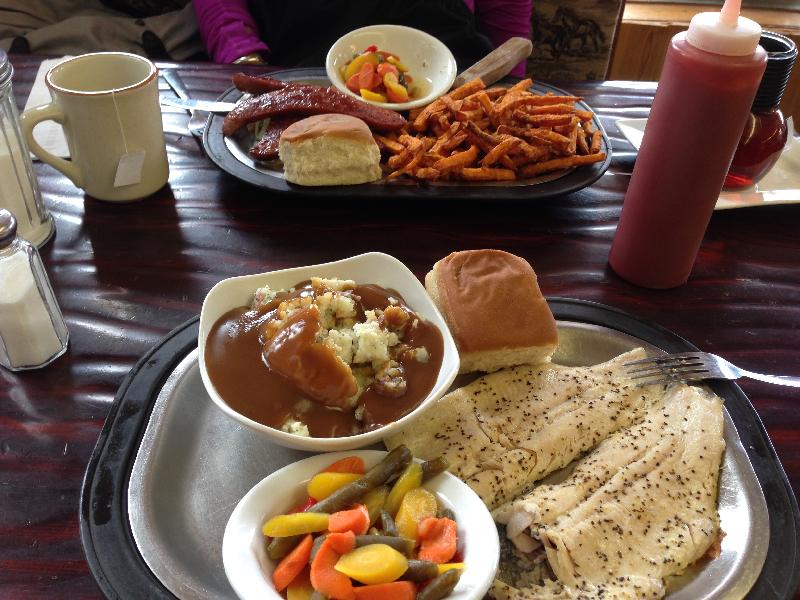 I snagged fish with potatoes and a mixed veggie bowl. The veggies were canned mush consistency. Jeanne had the Elk sausage/Buffalo sausage and sweet potato fries. It wasn’t too bad over all. One thing though. We overhead the waitress say they’d had snow overnight. When asked, she hoped the pass was clear since if it snowed in Dubois, it was likely it snowed at the pass as well.

On the way up to the pass it got a bit colder. There were blue skies though of course but with clouds. Still, the chill was a bit of a concern. I don’t mind it being a little cold and I’d have just pushed on. But this was Jeanne’s first longer trip and she may not be ready for a long, grueling trip. We’ll have to discuss it later. Still, it still was a pretty nice day for a ride. 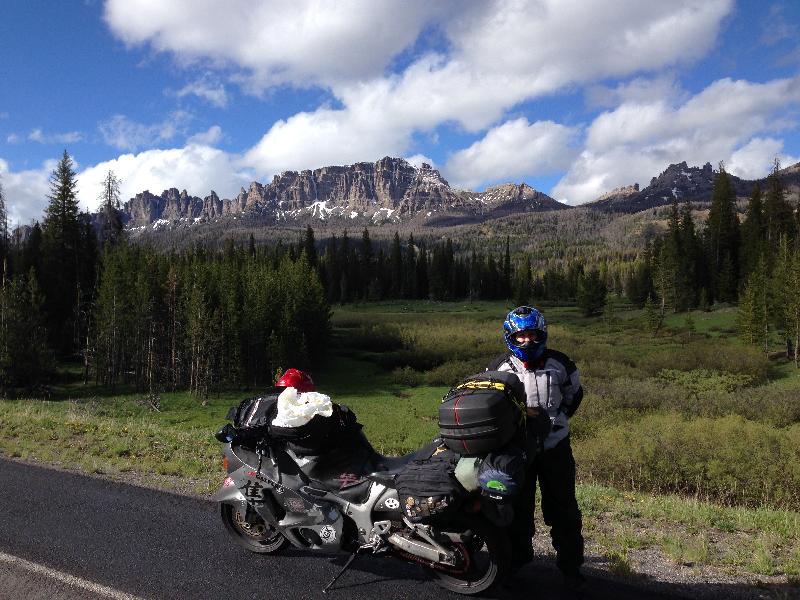 At the top of the pass we stopped at the rest area to hit the bathroom and since this is supposed to be a pretty good viewing area of The Grand Tetons. However it was all pretty clouded over so no real view. While we were waiting though. 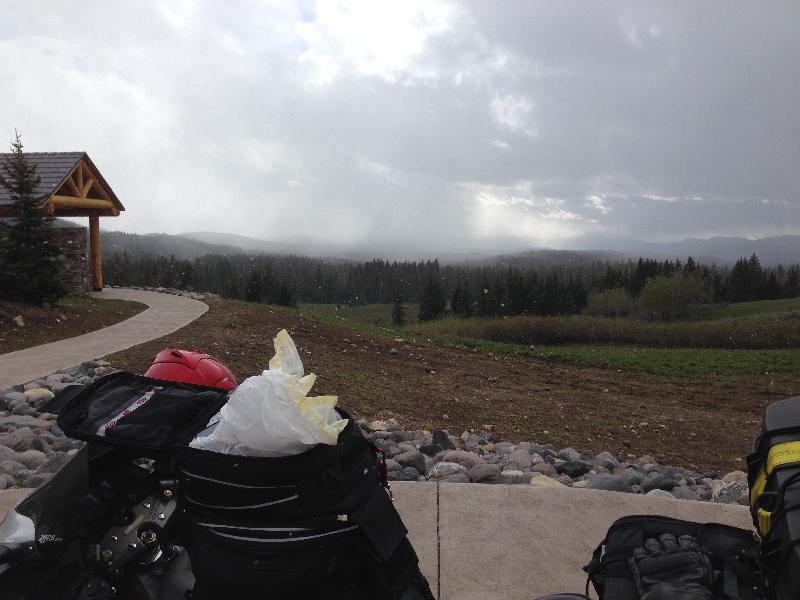 Snow! It’s fricking snowing. This does not look good. We got geared up and headed on down to the Teton Wilderness and our first camp site. We got to the RV place I’d used a few years back and decided to snag a cabin. We got our gear out and set up ready for the night. 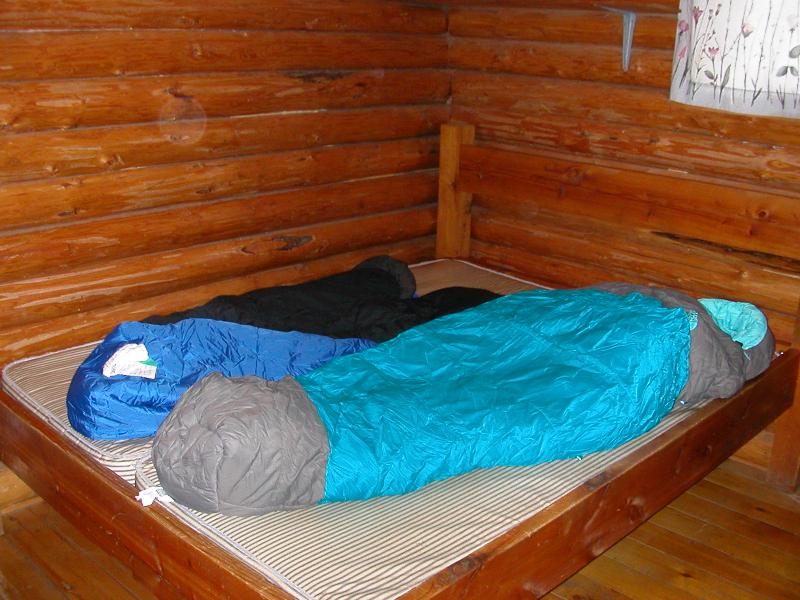 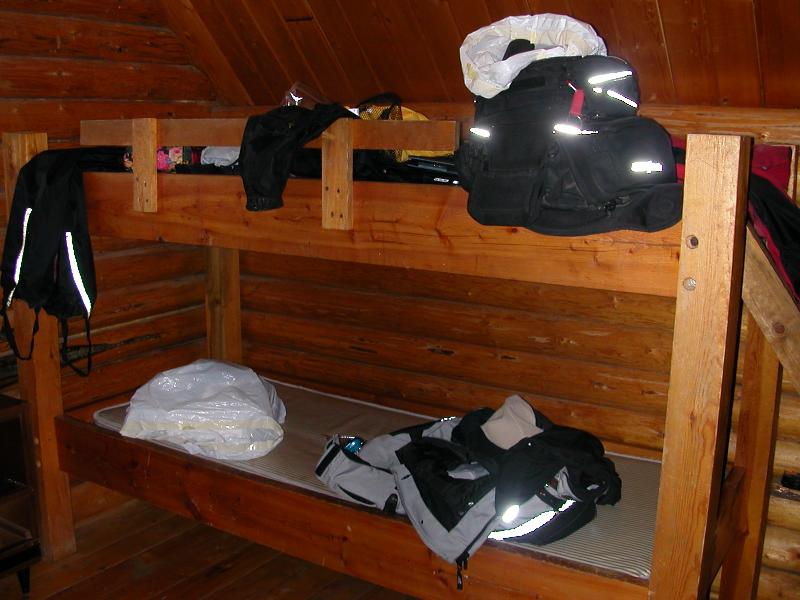 One of the silly things I’d forgotten about these things from last time I’d been in one of these cabins is the bed is made for someone 6′ tall. At 6’2″, I was pushing against the base with my feet or had my feet hanging over the edge. It wasn’t the most comfortable arrangement. The next day I thought I could have just thrown the pad down or even the mattresses down and slept more comfortably on the floor but it didn’t occur to me.

Before going to bed, we read a little of course. I went outside to walk around and see what I could see. There was what appeared to be a beaver in the water behind the cabin. I only saw him briefly. And The Grand Tetons were there of course but hidden by clouds. 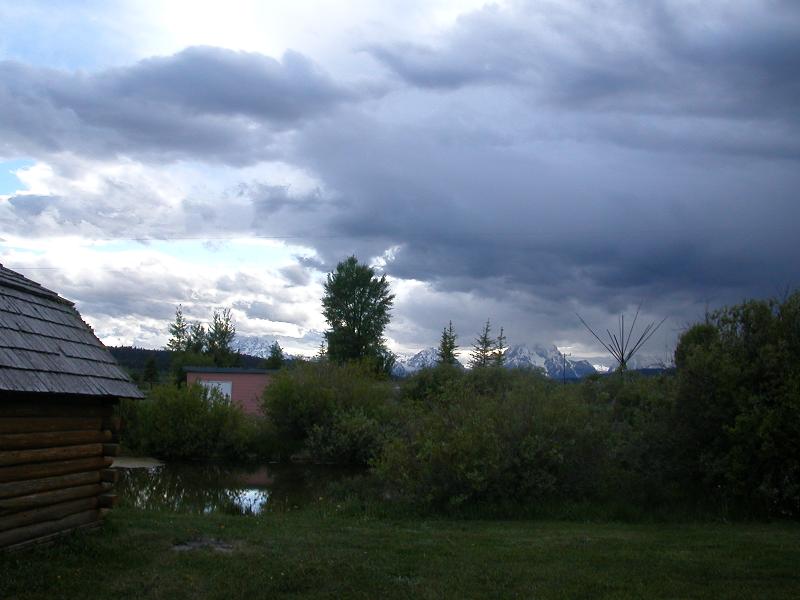