I’d spent the evening getting the bike packed and ready to go. There was just the morning gear and I’m ready to head out. Rita had the car packed and she was heading up 25 to 80 and was going to meet me in Green River. After putting the cats in the car, I headed off to get gas and reset the starting mileage. As I got to the 136th street bridge, I spotted Rita behind me while waiting at the light. A wave and that’s the last I saw of her until we met at Green River. 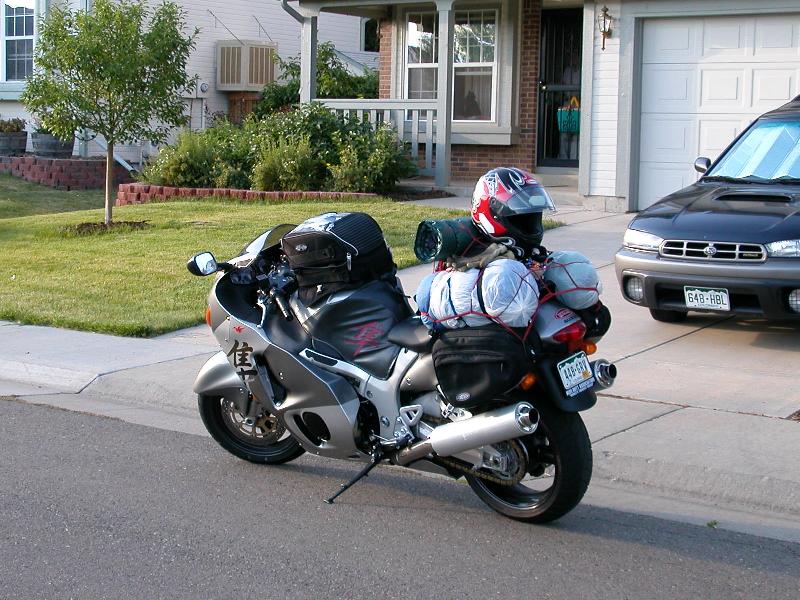 I was riding pretty comfortably on 25 north intending on making the left into Ft Collins to take Poudre Canyon. At one point, a BMW convertible and a pickup passed me at a high rate of speed. After making the turn into Ft Collins, I got up to the light before the railroad tracks and there were the two. Pickup in the left lane and BMW in the right. I got behind the truck. The BMW was slow at the light so I swooped in front of him and made the right turn after the tracks. He seemed a little put out by the move and tried to keep me from getting in front of him when the road went to one lane. He peeled off at the bypass and I continued on.

It was a nice day for a ride, a bit chill but beginning to get warm. I stopped at the Conoco at the corner of 287 and 14 (Poudre Canyon Road), filled up and took a break. I screwed around with the phone since it seems to have stopped working. I’d used it before but now I couldn’t hear Rita when she called. She could hear me though. I had the GPS set up as well and was keeping an eye on the info; particularly speed since my speedo appears to be off by a little.

The first part of Poudre Canyon around Stove Prairie Road is a great ride. Nice twisties and little traffic. As I reached the cliffs and got into the sweepers, it started warming up a bit but I was able to go a little faster. I was also able to start passing cars which was more difficult in the beginning.

It was early enough in the morning that my shadow stretched a few feet in front of the bike. It was cool seeing my shadow head into a turn just before I did and shifting left and right through the turn.

I passed Profile Rock and Elephant Mountain (which looks like the head of an elephant including the trunk). As I approached Cameron Pass, I could see some snow a hundred feet or so up the hillside and a nice profile view of Mt Richthofen. 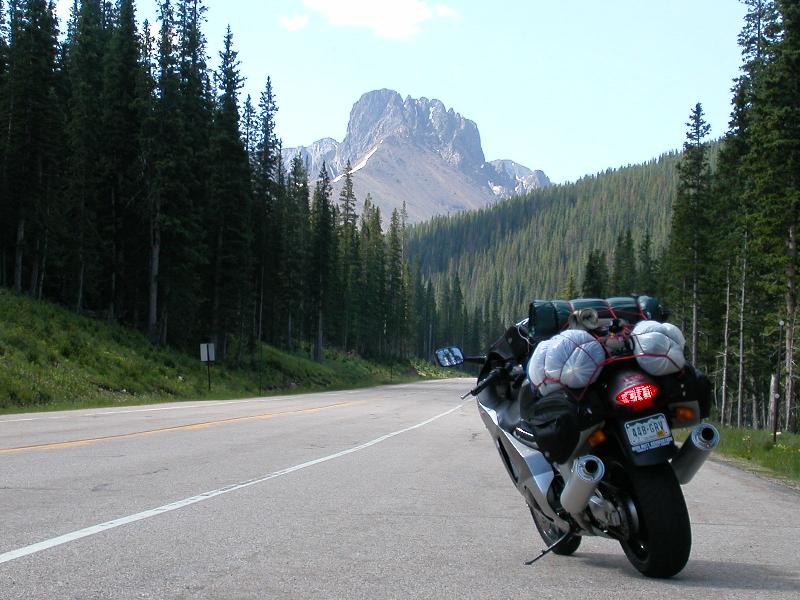 One of the things I’ve been learning about sport-touring is that when you see a good picture, you should turn around and take it. You’re never in so much of a hurry to try and capture a piece of beauty. In addition, you should try to get your bike in the picture. After all, everyone gets pictures of Mt Richthofen. How many have a picture of a Hayabusa? (Does that taillight look a little bright? {foreshadowing; hinting of things to come} 🙂

There was a group of folks hanging out at Cameron Pass waiting on the restrooms. The guy (who had one arm) asked me if I was cold. While it was a little chilly since we’re at 10,276 feet, I said I was reasonably warm in my Aerostich.

After taking a break I hopped back on the bike and headed down the other side, Mt Richthofen off to the left looking very imposing in its grandeur.

The ride back down wasn’t at the speeds that I’ve gone down before due to several RVs backing up traffic and little opportunity to pass until we reached the valley floor. In Walden I parked next to a large group of cruiser riders that included a GSXR in red and black and an FJR in silver grey. I chatted with the guy next to me and found they were down from Cheyenne and heading by Steamboat Springs and Craig before heading back home.

I also intended on a similar path but continuing on past Craig so I bid them farewell and headed off. While I was at the station, I looked at the map and found a little non-highway road over Buffalo Pass that looked interesting. The pass is in Routt National Forest and appeared to be a dirt road. I figured, what the heck. I can ride a dirt road and the motel isn’t a long distance away so when I got to the turnoff at Hebron, I made the right and headed off on an adventure.

A couple of miles before Routt the road turned to a hard packed dirt road. Not horrible but still an interesting ride. I stopped at the entrance to Routt for a pic and then a few feet farther for the signpost to Buffalo Pass. 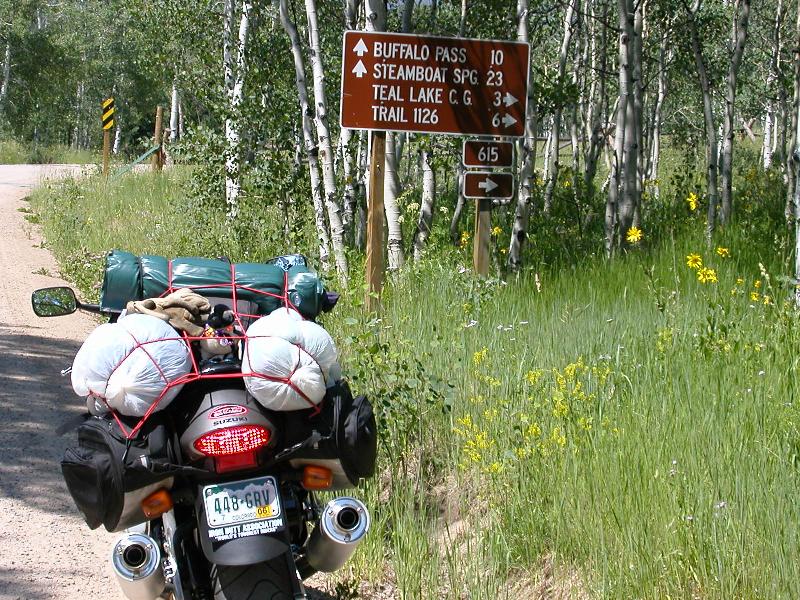 The coolness in the air, the smell of the pine trees and wildflowers were just outstanding. Especially the pine. It was heavy and made me want to stop right there and set up camp. The road itself wasn’t too bad until the last few miles. A sign warned of dips but they were actually humps. And on the other side of the humps were gullies where the water ran across the road. At the first one I spotted a deer on the right side of the road. I startled him so I slowly rolled backward for a better look and he bounded off into the forest. As I headed up I came over a hump and there was a pretty deep gash in the road that I hit pretty hard. From them on I took it easier but I still hit some pretty hard. 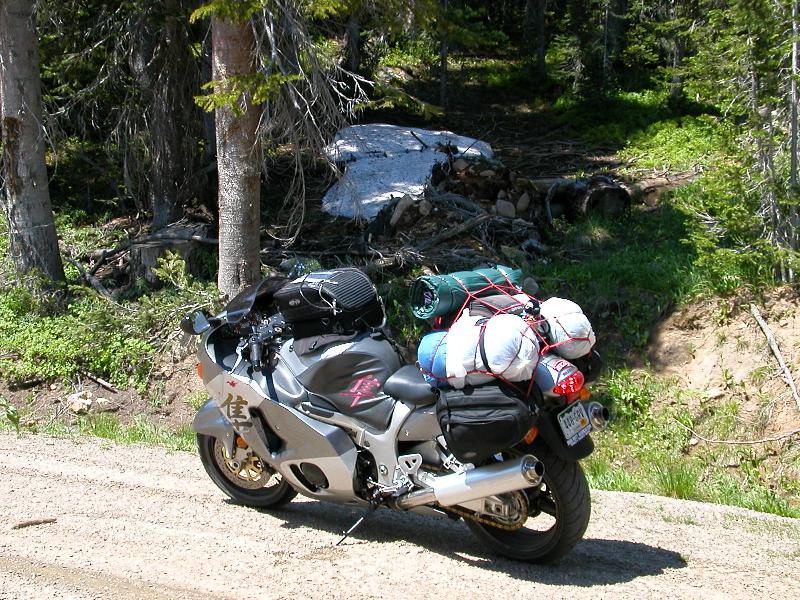 As I approached Buffalo Pass, I passed a snowfield on the right with mountains in the distance. The recent hot days at home made seeing snow somewhat of a novelty so I stopped to capture the memory. 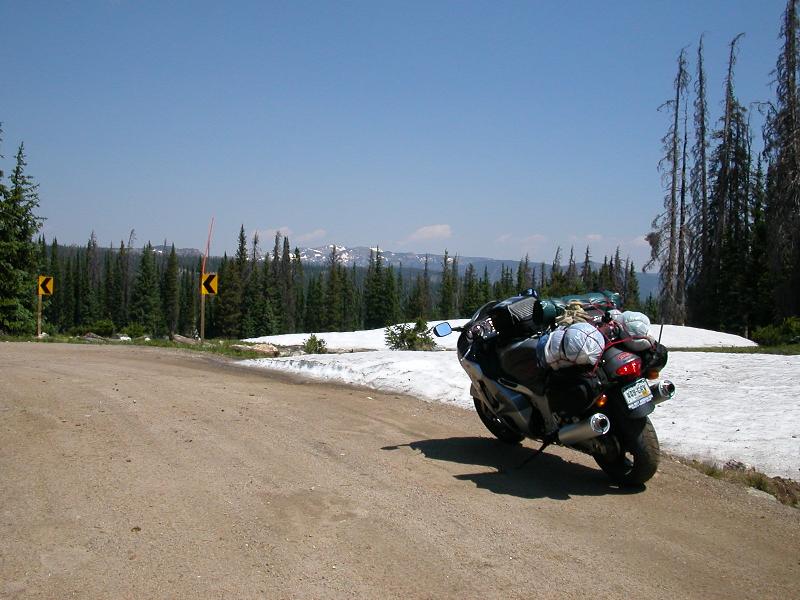 Buffalo Pass wasn’t clearly marked but there was a campground at Summit Lake with quite a few cars. On the other side of the lake, the road continued on down to Steamboat Springs but the condition was significantly worse. I got a couple of shots but they don’t really portray just how bad the road was. It was pretty clear the traffic coming up from Steamboat Springs was causing all the rough roads. There were lots of rocks, ruts and potholes in the dirt road. I was able to keep it reasonably stable but there were a few bumps that were pretty hairy. Plus at one point, I drove between the narrow space between two rocks. I was sure I was going down there but managed to keep it upright. 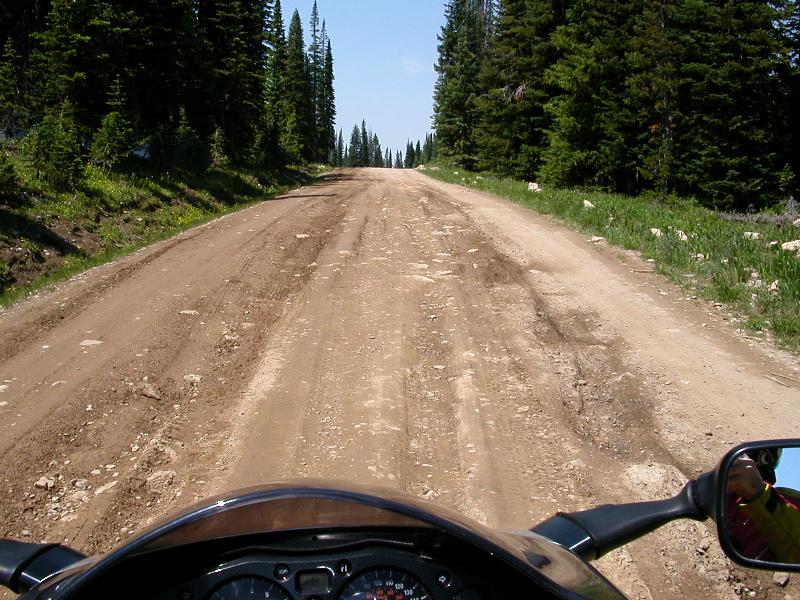 Meanwhile, I had the iPod playing and was curious about the music selection. I kept hearing the same tunes over and over and they were pretty slow. The past couple of days I was setting up the tunes and cleaning up the lists on the Mac. I still had too many to fit on the iPod though. I plugged it in and the external drive would grind away then pop up an error; too many songs for the iPod. This happened a couple of times and I didn’t pay much attention to it figuring with all the noise, it was just copying as many as it could. I’d deleted a couple of hundred songs from the beginning of the original list that I didn’t want to listen to on the road. Quiet slow songs that just weren’t appropriate for riding. Turns out iTunes deleted all the songs off of the iPod in preparation to copy but didn’t delete the songs I didn’t want to hear. So I ended up with three hundred or so songs that I really didn’t want to hear on the road. Talk about annoying 🙂

So I got down to Steamboat Springs threading my way through the roads. I followed the GPS until I got to 40 and headed west. I was going to hit the gas station but gas was running at $2.64 so I continued on down to Craig. I rolled through town then back until I found the station with the best price and filled up.

I checked out the route. I was going to take 40 south of Dinosaur National Monument and then 191 up in Utah but I was hooked on the side roads. They didn’t seem so bad so I decided I would take 318 up to Dutch John and then catch 191 up to Green River. So I made the right at Maybell and headed off yet again. The road was pretty nice then I got to a fork where 318 to the left was still paved and 10N was packed dirt. It took a few minutes but I finally decided to take 10N. It was a nice hardpacked road and I was able to get to 70 in places 🙂 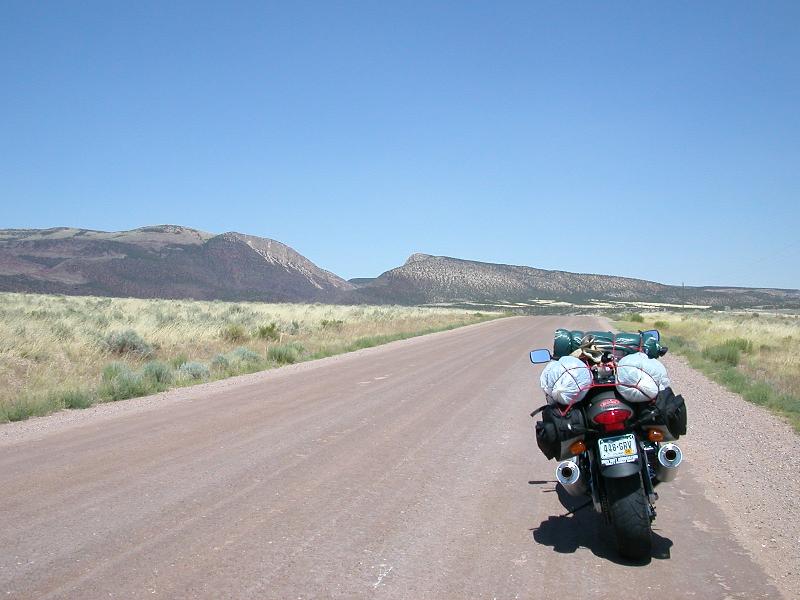 Up ahead there is Irish Canyon. A sign at the entrance says that Irish Canyon was named for three Irishmen who robbed a Rock Springs saloon and stopped to consume part of the take in the north end of the canyon. A long way to go before taking that drink. I hope it was worth it 🙂

I’d loosend my ‘stich to get more air but with the wind I was ballooning up even with the vents being open. 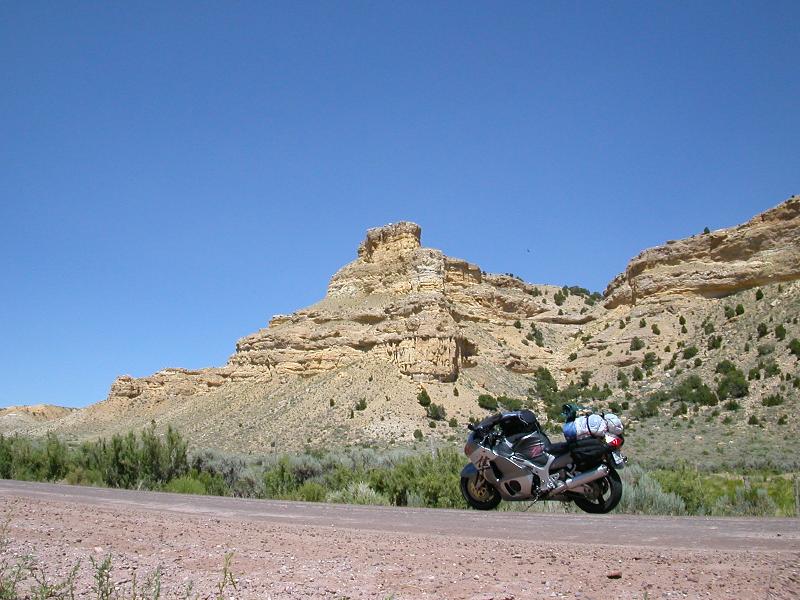 I stopped at a Phosphate processing plant and zipped up the stich. When I got to Rock Springs, I spotted a Harley behind me. When I got to the light, he pulled up next to me and we chatted until the light changed. I headed up to gas up and called Rita. She made it to Green River at 3ish and got our room.

After we got together, she said her ride up 25 and down 80 wasn’t a big deal except for one incident. See, we brought the cats along this time because they were getting a little odd when we went away on trips. So she’d been parking the car in the shade when she hit the rest stops until she got to one where there wasn’t any shade. She left the car running but took the remote so she could get back in the car. However, she found out that the remote doesn’t work when the car is running. Probably to prevent accidental unlocking of doors while the car is moving. So she couldn’t get back in the car and of course it was running. She tried to call me but I wasn’t in any service areas so she couldn’t reach me. She was going to contact a locksmith when a couple of guys from Colorado offered to help. The one guy unscrewed his car antenna and was able to slip it down and roll down the window enough to unlock the door. Good thinking there guys.

We had dinner at Don Pedro’s Family Restaurant; a Mexican food place. The food wasn’t too bad but a little blah. Not quite up to some of the places we’ve eaten at.