We woke up on time and gathered our gear together. I got the bike loaded up but left my tent, sleeping bag and pad in the back of Rita’s car. No sense carrying it now. After we got done packing, we went to get the cats but couldn’t find Arial (the black cat). He’d taken to hiding in the mornings since he doesn’t like riding in cars. Niki has no problem with it and enjoyed the outing. I hunted under the bed and glanced at the box springs. No feet indentations. We started checking outside and the halls to see where he might have gone. I’d swear he hadn’t slipped out while I was going through the door however one time he ran back away from the door so he was checking it out. Rita had their food dish and was outside shaking it trying to call him. After 30 minutes or so, I told Rita that she’ll need to get the room for another night since we’re not leaving without him, fool cat. I checked the room one more time and this time his feet were making an impression in the box springs covering. I poked at him and tried to get him to come out but he wasn’t budging. I tipped the mattress up then the box springs and then pulled out the covering along one side of the springs until I could grab him. He was fighting but I got him out. We put the bed back together, put the cats in the car and checked out.

I was going to take 191 north to the Tetons but decided to take 372 instead. It was a less travelled road which is always more interesting. I hopped on the bike and hit 80 for a couple of miles until I got to the 372 exit and headed north. Traffic was light however there were several semi’s. 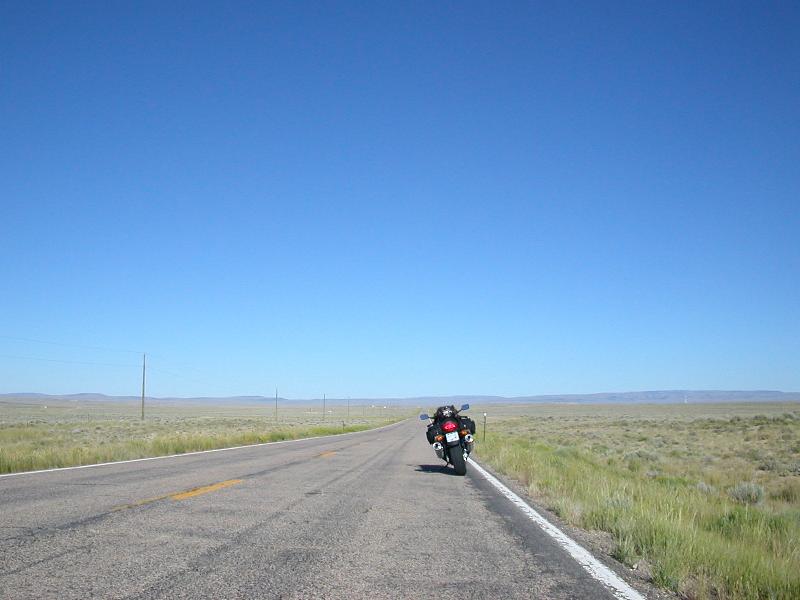 At the turn onto 189, the road had been freshly oiled and chipsealed which was a lot of fun but just a few miles down the road, construction was happening. The road turned to dirt and I stopped for a few minutes letting the semi that was behind me go ahead. I wasn’t going to be moving very fast and didn’t want to be too close to a semi throwing up rocks and crap. After a few minutes I moved along but shortly came upon a line of traffic. One lane road ahead. I stopped for a few minutes and waited for the lead vehicle to show up. 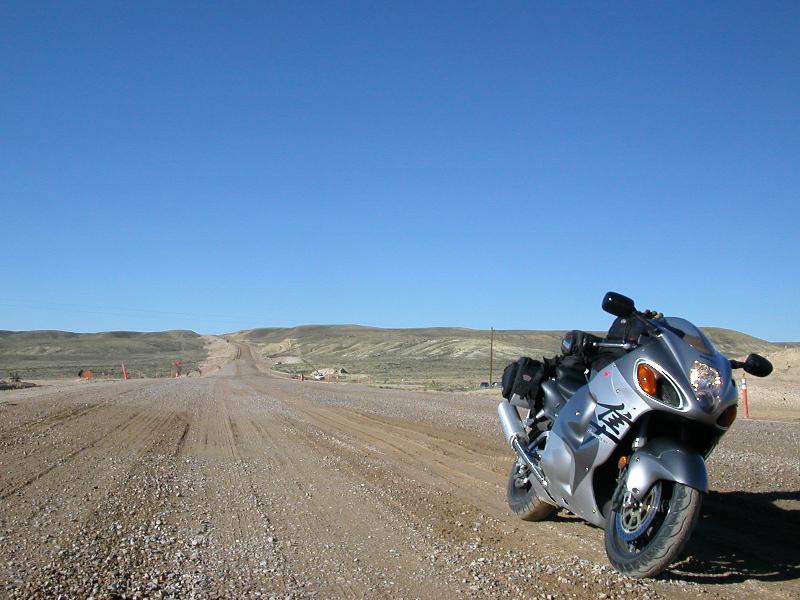 When the lead vehicle arrived he motored back to where I was and told me I was to lead the pack. Reducing damage from rocks I’m sure, or at least keeping the pack at a reasonable speed since bikes like mine won’t be haring across the gravel. We traveled down to the Fontenelle Reservoir and was released until the next stop about half way around. We had to wait again for a few minutes then headed off again. At the other side, the road turned to asphalt again and I stopped in La Barge for gas and a break.

As I approached the Teton National Forest, I got behind a couple of RVs followed by several cars and a couple of cruisers. After several minutes, I wanted to pass them in order to have free rein in the forest so I passed at the first chance and boogied on down the road.

The roads up to 26 in Hoback Canyon were nice big sweepers. I was able to take them at a pretty good pace and enjoy the cooling down of the air as the altitude increased. When I reached 26, I had to decide. I wanted to see the Tetons, but the road following the Snake River looked grand as well. After a moments thought, I made the left and followed the Snake River. Again, some great sweepers and light traffic. Most folks appeared to head north to the Tetons leaving the nice bike roads to me.

I stopped at a boat ramp and rode down to the river. There was a beautiful red bridge but it was blocked since it went to a country club. 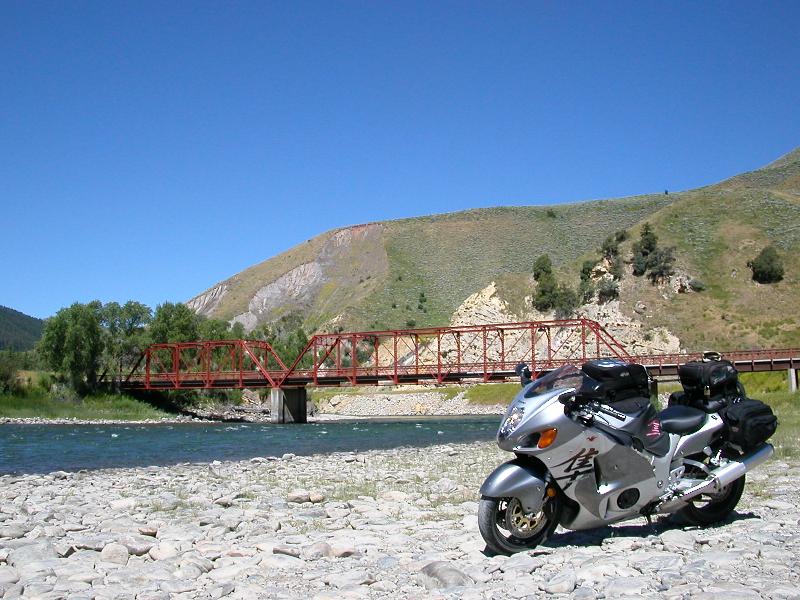 When I crossed into Idaho, I traveled next to the Palisades Reservoir where traffic was a little heavier. I followed 26 into Idaho Falls and hunted for 20 west. After a little running around, I found the exit and stopped briefly for lunch and a break.

This part of Idaho is the flattest most barren place I’ve been in in some time. Even Kansas was hillier 🙂 From looking at the map, there are lava beds all through the area with the Big Southern Butte (at 7,576 feet) visible for some miles. 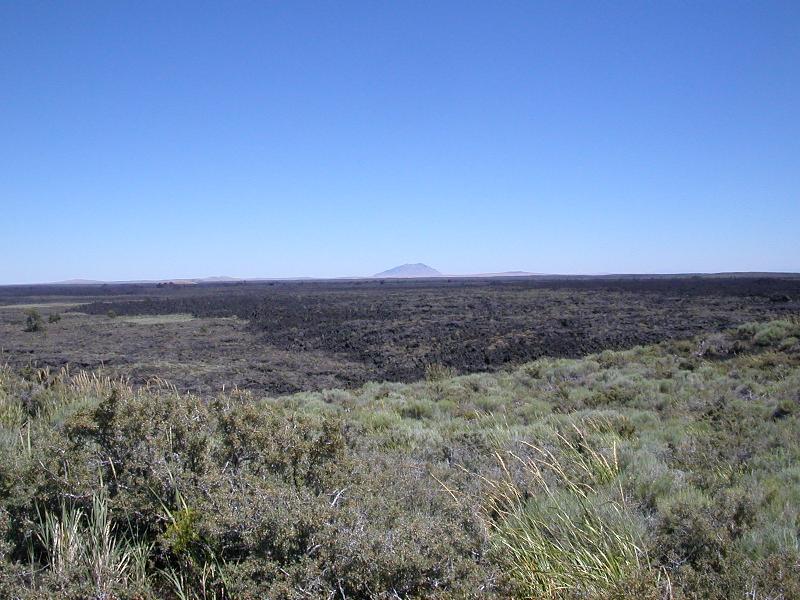 As I passed through Arco (first city powered totally by atomic power) and headed south, I intended on stopping at the Craters of the Moon National Monument since seeing the reference in Dantesdame’s 2005 National ride report. It was one of the reasons I came this route.

It was pretty hot out and all the vents were open on the ‘stich. I went in to the park and decided to ride around the loop. When I got to the Inferno Cone, I decided to stop and get a pic. 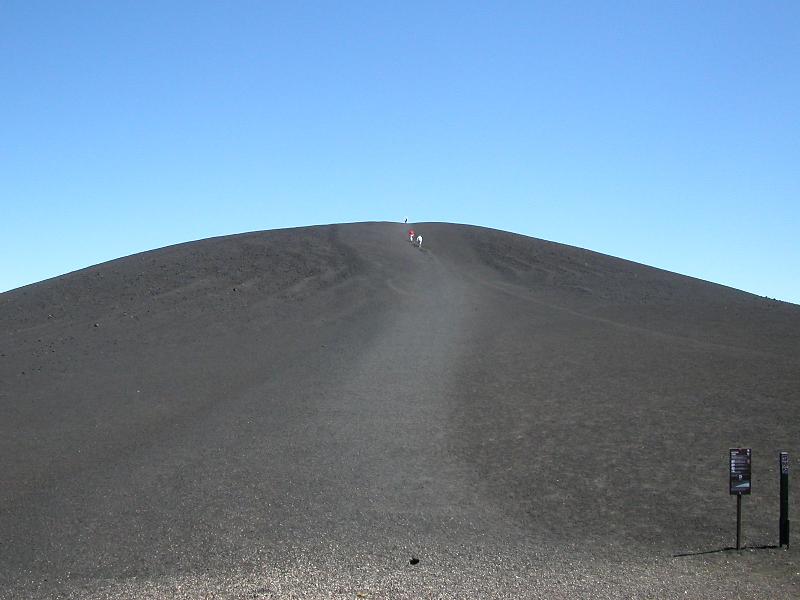 When I realized you could hike to the top, I shed my gear, locked it to the bike and headed up to the top. It wasn’t much of a climb except for the heat. A bunch of kids were up on top playing hide and seek. Looking out over the lava fields was pretty cool. You could see for miles and the closer lava cones looked pretty interesting. 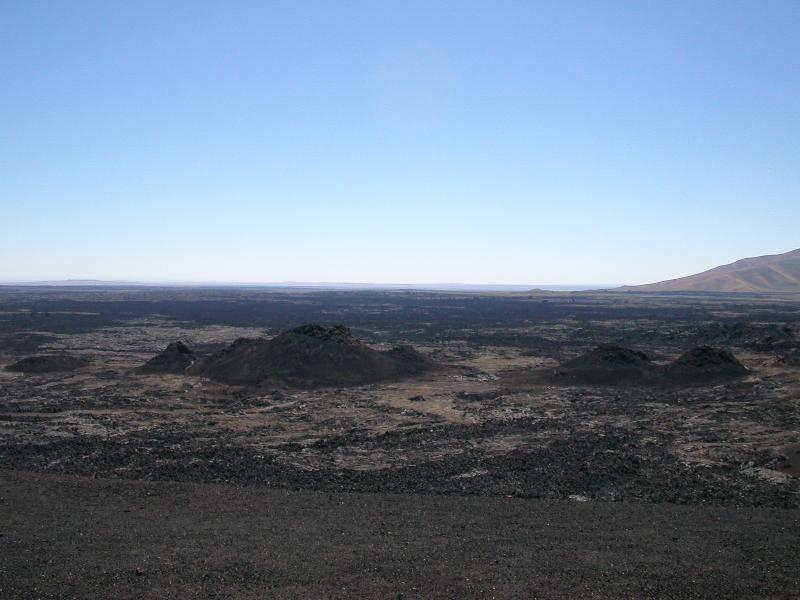 I took a couple of pics of the surrounding area then spotted a couple of good shots. I decided the second one came out the best. Again, that’s the Big Southern Butte off in the distance. 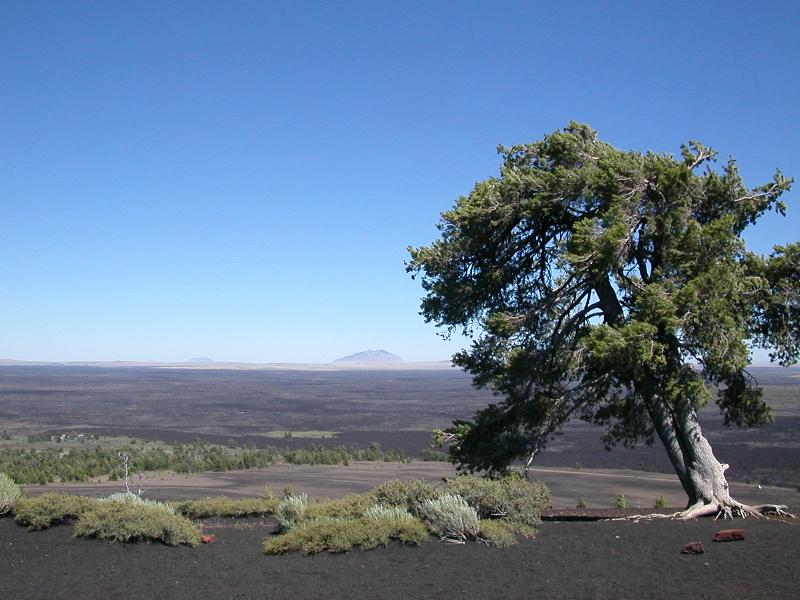 I headed back down, got into my ‘stich and continued on around the loop. When I got out of the park, I found some more lava outcroppings and stopped for another quick one. 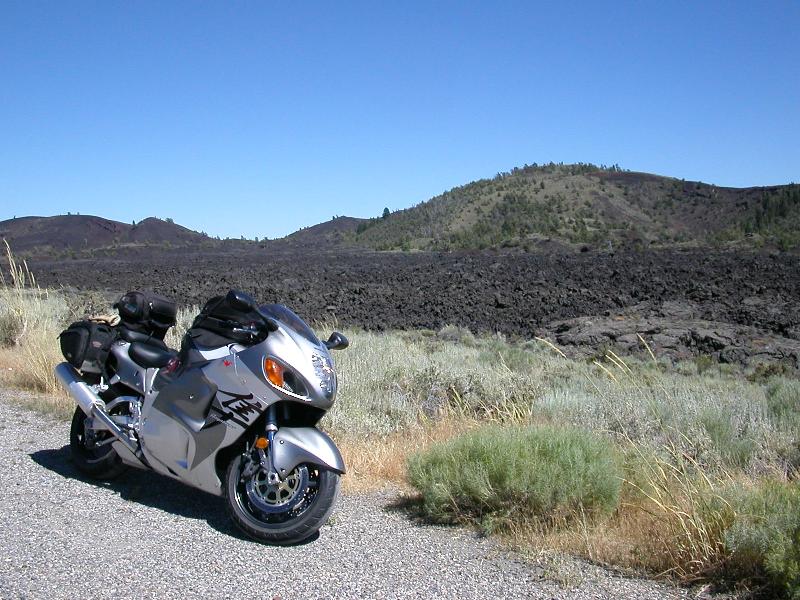 After the park I made a right turn on 20 in Carey passing through Picabo, over Little Camas Pass and down Goodale’s Cutoff (a way to try and avoid the Shoshone indians). The ride down to Mountain Home was pretty cool. Nice little twisites coming down off the pass. The rest of the way to Nampa was pretty uneventful since it was on the slab. It was very hot though as temps in Boise were exceeding 100 degrees.