At 4:50 I woke up. I got my gear together noticing that the tent was rather damp from the dew. After getting packed up I headed out. I stopped at an IHOP for breakfast and chatted with Rita until the battery died on the cell then headed north. The morning was on the cool side, hovering around 50 degrees so I was glad to have the sweatshirt. As it started warming up to 60, I began shivering a little.

As always, when I approached the Canadian border at Sumas/Huntingdon I was a little apprehensive. He asked me if I’d been in Canada before (yes), where I was going (Jasper) and where I was from (Denver) then let me through. After going by I took it a little slow since I have to register the changed speed limits and keep an eye on the inside orange speedo reading. It took a bit to change my 70 miles = 1 hour vs 100 klicks = 1 hour rough thinking.

I stopped in Chilliwack to take a break and grab a soda from a Burger King. I chatted with an older guy who asked me about the bike. He thought the biggest problem would be with speeding tickets 🙂

The mountains in Canada heading up 1 were awe inspiring. On the side of the road the waterfalls coming right down to the freeway were quite beautiful. It’s too bad that there was so much traffic and the shoulders were so narrow. I considered pulling off to get a pic or two but I needed to be in Jasper tonight.

In cache creek while filling up, a couple pulled up on their Harley. He asked how fast I’d been on the bike and I told him 160. He said that I still had a ways to go, eh? The bike will go 300 klicks, right? It didn’t dawn on me until I was on the way that he thought I’d gone 160 KPH and not 160 MPH. Had I known I would have told him that I’d gone 255 klicks

When I got up to 5 north, I was still admiring the mountains. There were Jersey barriers everywhere (I wonder what they’re called in Canada) making it difficult to get a decent shot. The entire valley was glacially created so the peaks were high but the valleys were broad and rounded. Beautifully rounded and forested slopes up to the tree line looking like a green wash. 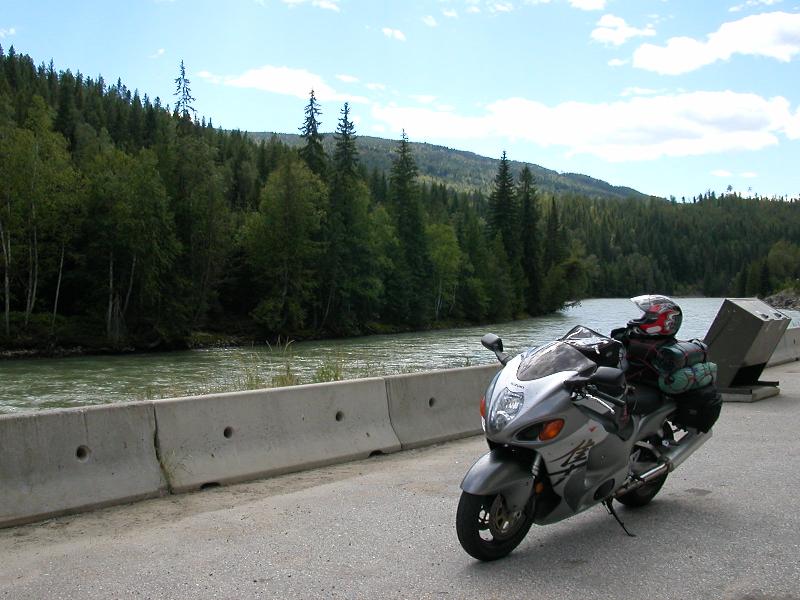 Something weird though. As I got closer to 16, the bridges seemed to be coated in kerosene. There were long tire trails exiting bridges and I kept to the tracks to try and avoid splashing too much up on the bike.

Finally at Avola the traffic cleared up enough and there were pullouts where I could stop and get a pic or two. There were still Jersey barriers though. I was heading by a great view when I realized there were no Jersey barriers so I turned around and got a nice pic. 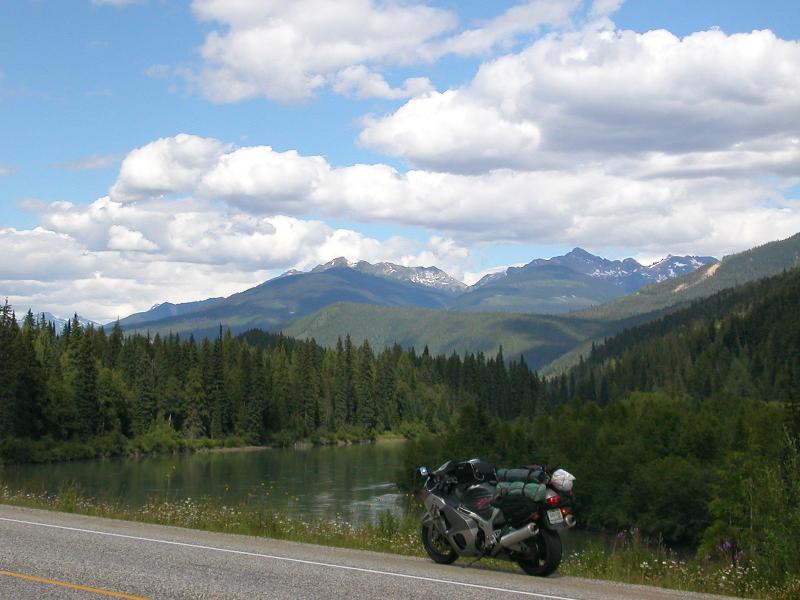 Later I was able to do it again when traffic was on the light side. 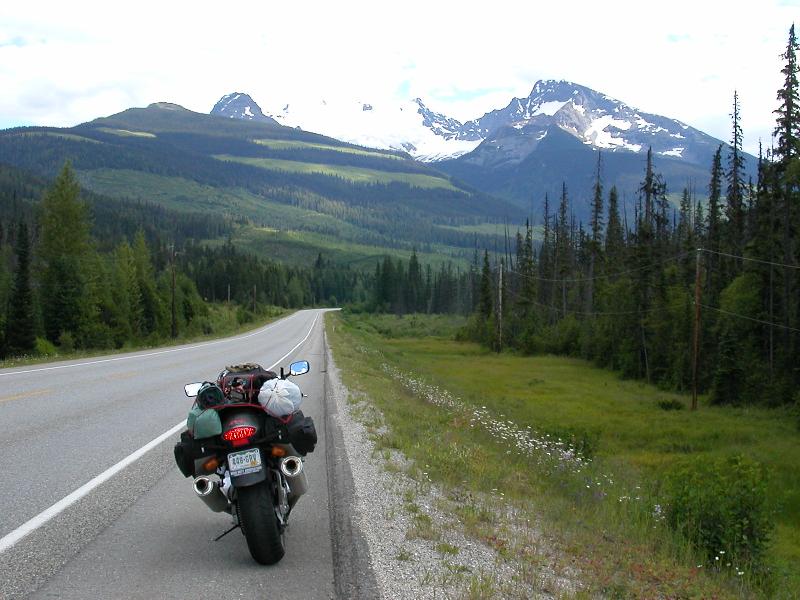 At Valemount I met a couple of guys on bikes; one an SV and the other an open framed bike. We chatted briefly as we cleaned our helmets. They were heading up to Jasper too.

At the 16 intersection I made the right towards Jasper and as I came around the corner I spied Mt Robson at 3954 meters. That was awe inspiring. There was a rest area just on the other side of the pass but no good view so I looped through and then stopped on the shoulder with others to get a picture. I must say, the picture does not do it justice. The size of the mountain and it’s imposing presence is just not able to be captured. It’s much closer and higher than it appears in the pic. The peaks were scraping the lower layer of clouds clean and throwing a spray of snow and ice behind it like an upside down boat. 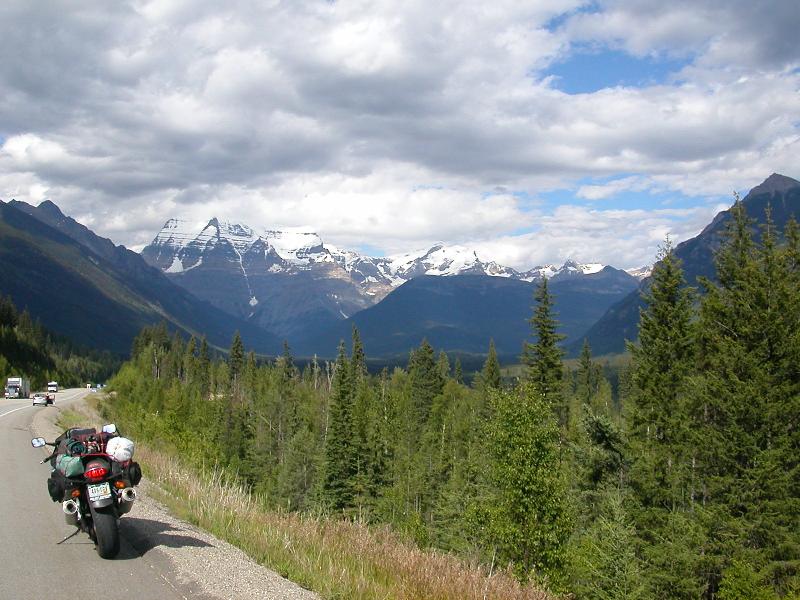 On my way in I followed a river up to Moose Lake. The river and lake were a milky green in color. Some quick checking and I wasn’t able to find out what caused the color.

While heading in, I was passed by a guy on a Harley. He’d head by and then get stuck behind a car or RV until I caught up and passed him. A bit later he’d pass me again then the same thing’d start all over again. Finally he stopped at the info board outside of Jasper. About this time the two guys I’d met back in Valemount passed by and I got behind them at the light. After the light changed, the guy on the SV wheelied into town.

I had intended on camping at Jasper but first I wanted to check out the motels figuring that if it were cheap enough, I might just get a room instead. We normally do two days camping then a day in a room. When I got there though I fould out it was much like a ski town, like Vale, and that rooms were likely to be far out of my range. So I hopped on the bike and headed down to the first camp site at Whistlers. There was a bit of a line waiting to get in and someone was out with a sheet of paper and chatting with the folks in cars. I figure he was checking on the intentions since the car in front of me turned around and headed back out. When he got to me I found that they reserve spaces for motorcycles since our needs are much smaller than a camping car or someone with an RV or trailer. I got my spot, headed over and set up camp. After dinner I took my food over to the lockers and locked it up. No need for any visiting bears in the night 🙂

The frigging mosquitoes were gigantic. One got the back of my neck and the other got me through my pants and bicycle pants I was wearing underneath. Rita’d given me some oil to use (she doesn’t like chemicals) which worked real well. I watched one mosquito hover around my hand until she landed on the sleeve of my sweatshirt and tried to drill for blood there. A swat ended that exploration. Since Rita hadn’t heard from me, I took my cell phone and charger over to the bathroom and plugged it in. I sat outside reading a magazine until I had a couple of bars then gave her a quick call to let her know I’d arrived in Jasper and was ok. The noise in the campground was up a little but a couple of earplugs took care of that and I hit the sack.