At 3:30 I woke up and it was pretty chilly. In breaking down the camp, my fingers got quite cold. Since it was cold, I threw on an extra t-shirt as well as the sweatshirt. I got everything packed up and headed out. The camp was pretty quiet and there weren’t many folks on the road at 7am. 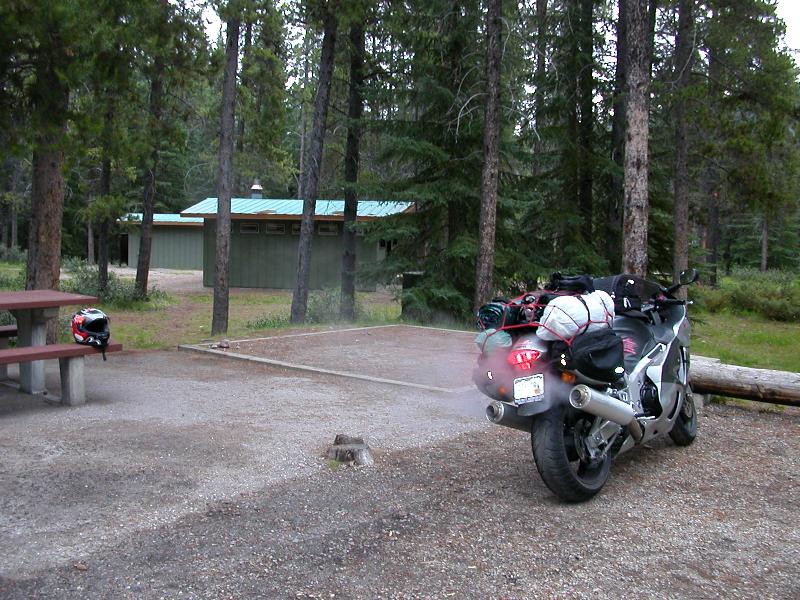 As I left the campground and got on Icefields Parkway, there were a bunch of elk feeding on the side of the road. The roads were nice and empty for that time of the morning so I was able to snap a quick shot. 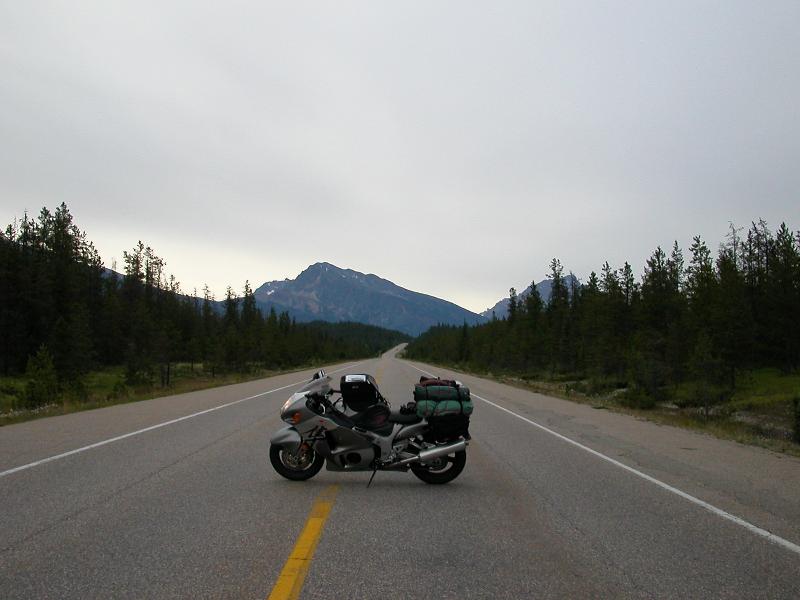 Unfortunately my thermometer said it was 40 but of course, with the wind chill it was a bit cooler. I got to the beginnings of the ice fields and had to stop for a break and tried to warm up. I hung out there for a good 15 minutes warming my hands on the bike exhaust and grabbing a snack for energy. 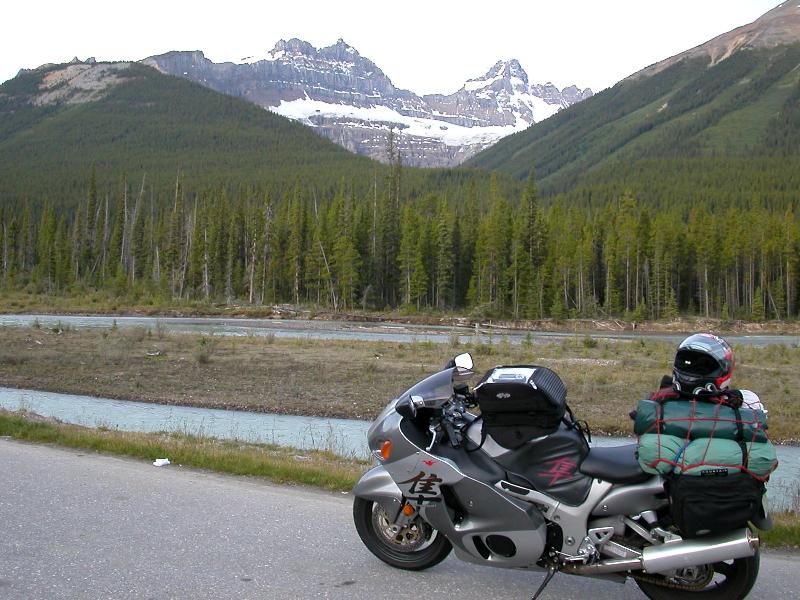 Several cars went by then a large group of bikes. I got suited up and headed on. The bikes had stopped at an overlook so I pulled in to take another break and get another picture. 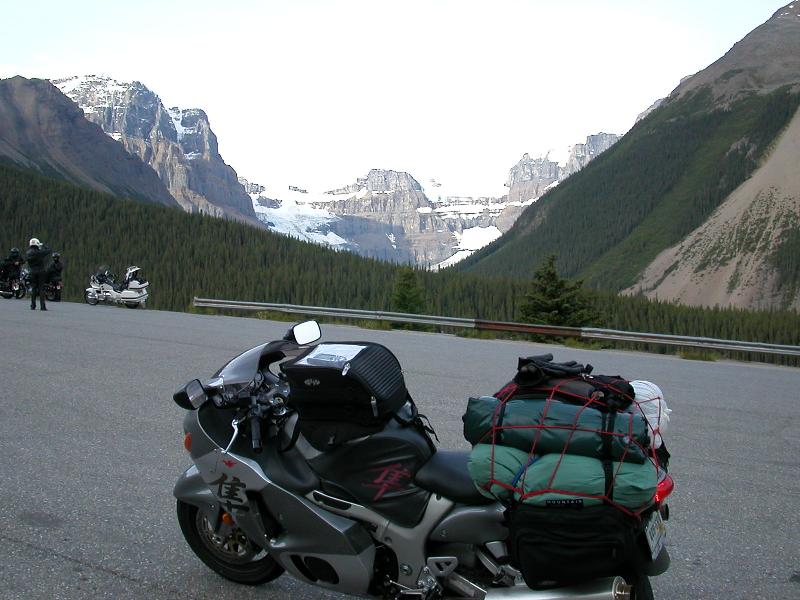 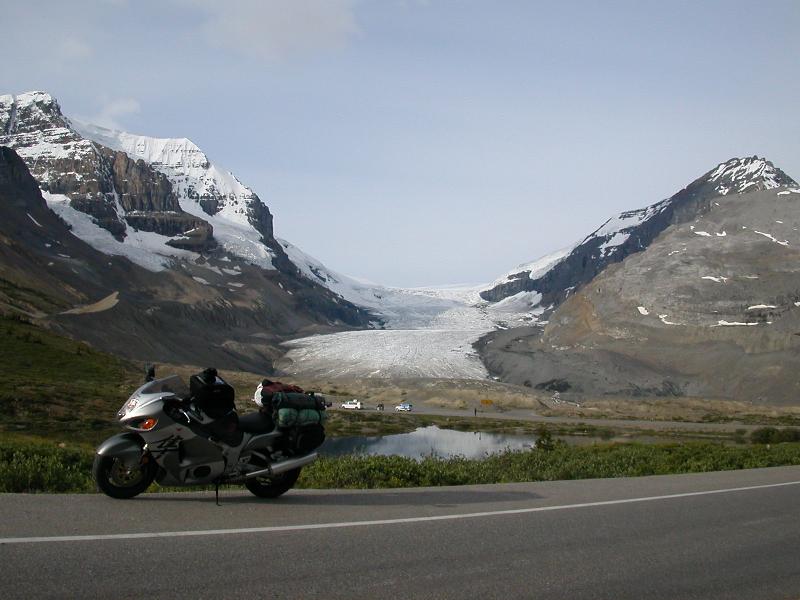 Man, the mountains are so close yet so high! Pictures just don’t do them justice. I started getting a bit warmer but still took another break for gas and to warm up at the intersection of 11. The temps were showing below 40 so getting warm was necessary. 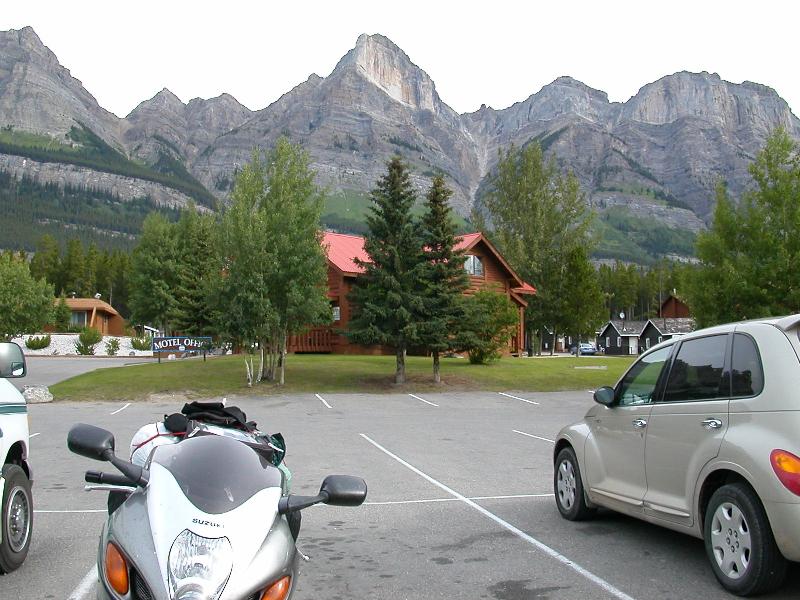 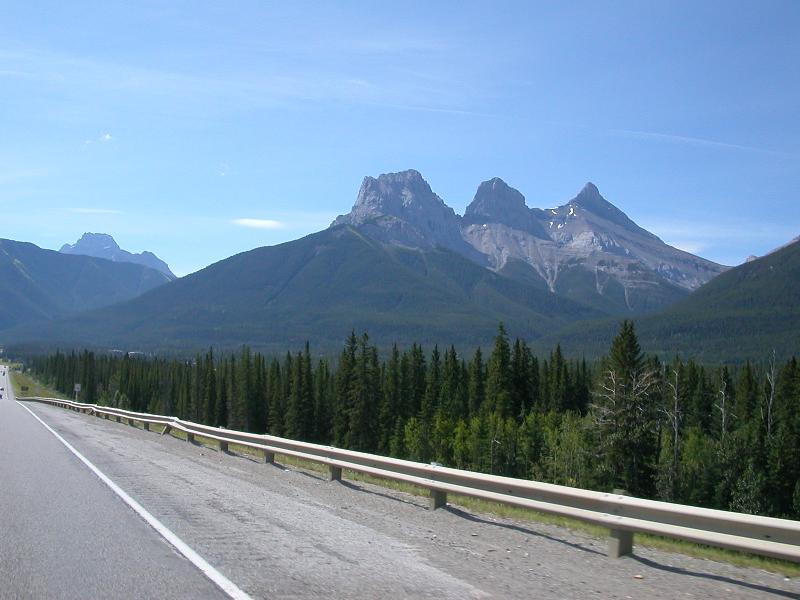 After the park, Route 1 was very very busy. I stopped at Dead Man’s Flat for gas then on to Calgary to get the chain tightened. For sure I must remember to put the socket and a 3/8″ wrench in the gear list for next time. Plus some lube and the plexus stuff Dantesdame was using. I got to Calgary at about 12:30 and called Rita to see if she could find a bike shop. While I was waiting on her, I asked the guy behind the counter and he just said “north” and waved his hand. Outside I snagged a mailman and asked him. He pointed me to Bowcycle and gave me directions. I headed down there but they didn’t have a 33mm socket, necessary to get the nut off of the axle. I didn’t want to hang around until his crew returned from lunch so I asked if there was a Suzuki dealer around that might be able to help. He pointed me to GWCycleWorld off of 2 and gave me directions.

When I got there I asked how long it’d take to get my chain tightened and the service manager said his guys were all busy so it might be 60 to 90 minutes. Well, no help for it and I hung around waiting for them to finish. By 2:14pm I was finally out the door and heading south. I was appreciative of his efforts but you know, as a Harley rider too, I know the Harley dealers have a policy of dropping everything to get you back on the road and I kind of miss that. It was a great feeling that I could stop in anywhere and get back on the road as soon as possible. The nice thing was that it only costs 15 bucks Canadian so it was only expensive in time. Must remember the additional tools.

Traffic on 2 was a tad heavy. I got to the border without much fuss and by hauling ass since I was a couple of hours behind schedule and it was eating into my Glacier NP visiting time. I stopped for a quick shot of Glacier National Park and Montana before approaching the border. 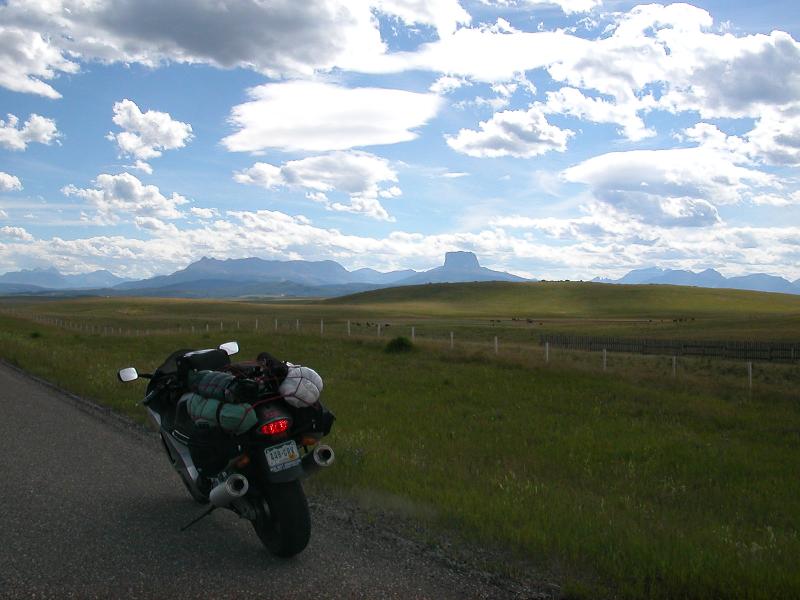 I rolled up to the border and the guard asked what I did, where I lived, if I was bringing anything back into the states and to look at my ID. Computers, Colorado, nope and here you go.

I continued past the border and started hunting for the St. Mary entrance to Glacier National Park. At the intersection for the park, I stopped for gas and then pulled in for a bite to eat. A buffalo burger that was more bun than burger. A handful of soggy fries that I only had a few bites of and I was off into the park. Had I been there earlier, I might have pulled off to take in the sights but I saw that half the campgrounds were full so I figured I shouldn’t dawdle. The drivers were coming towards me, looking at the sights and with the sun in their eyes. I spent most of my time keeping an eye on the drivers.

There were a couple of construction zones that reduced traffic to one way but mostly it was a fast, hairy trek to Lake McDonald. It seems other drivers had the same idea and were trying to get to the campsites before they were all gone. On the other side of the lake, I pulled in to the Apgar campground and went through the loops looking for a campsite. The first two were full (I started from loop D and went backwards since the other folks were heading to loop A). When I got to loop B, I found the last site. A little campsite that is good for a car or motorcycle. I pulled in, zipped down to the check in place and secured my site. 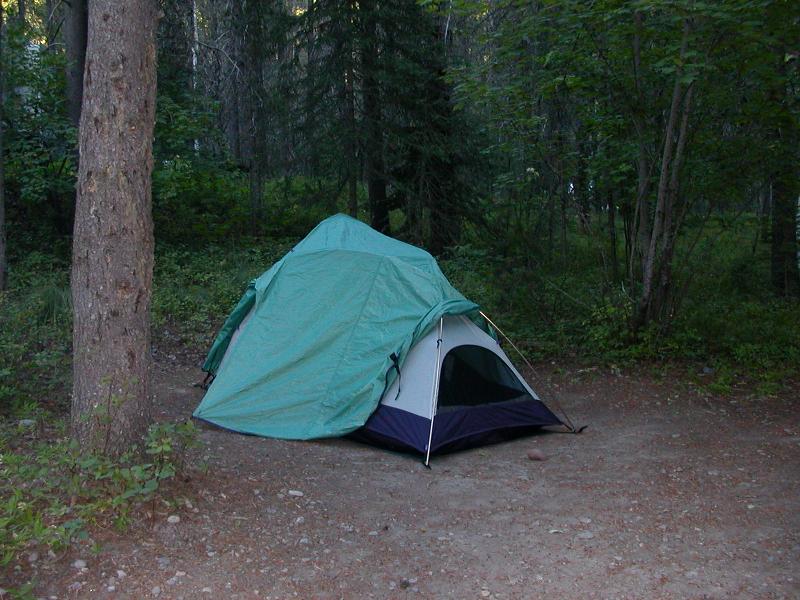 I figure that in the morning I can head back early and be able to take in the sights without much traffic trouble. I got my site setup, discovered that there was a large group of kids at the next site over who were a bit noisy. I headed out to the bathrooms and spotted a couple across the way at a campsite as well with a tent up. He was in his chair and she was massaging his feet. “Hey, can I be next?” 🙂 Turns out he’s planning on riding up to Prudhoe Bay. next year. He’d taken his BMW up to Alaska last year and wanted to go the whole way next time. I got cleaned up, headed back to my tent, put in my earplugs and went to sleep to sweet tinnitus.